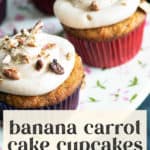 Banana Carrot Cake Cupcakes with Cinnamon Frosting are almost healthy with a banana and carrots to give them moisture.  Topped with a cinnamon cream cheese frosting these are pretty awesome. Also converts great to a sheet cake if cupcakes aren’t your thing.

If you’re like me and don’t normally make cakes, you will get all the flavor in these moist Banana Carrot Cake Muffins with Cinnamon Frosting. I don’t make a lot of cakes, it’s not that I don’t love them, but my family doesn’t love cake and while they might try a slice, I end up with a lot of leftovers that are hard to share.  If I make a cake in cupcake form, I can insert a filling like with Strawberry Filled Cupcakes or add cream cheese and chocolate chips like with Chocolate Muffins and I can have an easy to eat single portion to eat or share.

These cupcakes are easy to make and by far one of my favorites. They are basically a yummier version of carrot cake.  The addition of bananas keep them moist whether you’re making cupcakes or a sheet cake.  The frosting is over the top cream cheese frosting with some added brown sugar and cinnamon. Don’t leave off the toasted pecans.

Can you make Banana Carrot Cake Cupcakes into a SHEET cake

While I love a cupcake, there are times where you don’t know exactly how many people there are going to be and you need a large sheet cake.  I ran into this dilemma a few weeks ago where I wasn’t sure if there would be 15 or 30 people, so 24 cupcakes might not have been enough. I needed to be able to travel with the cake in the car for a couple of hours and have it look and taste great.  So I opted for this cupcake recipe that we love and it turned out great in cake form.

To be on the safe side, I made two of them.

While it was a big hit at the gathering, I still prefer it in cupcake form. These are great for birthday parties or special gatherings and they are not over the top with sugar.

Adapted from  The Recipe Girl 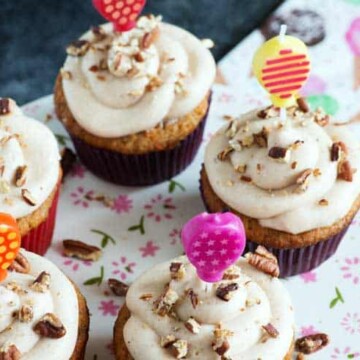 Author: Barbara Curry
Banana Carrot Cake Cupcakes with Cinnamon Frosting are almost healthy with a banana and carrots to give them moisture.  Topped with a cinnamon cream cheese frosting these are pretty awesome. Also converts great to a sheet cake if cupcakes aren’t your thing.
5 from 1 vote
Print Pin
PREP: 30 minutes
COOK: 18 minutes
TOTAL: 48 minutes
Servings: 24