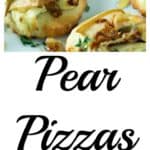 Pear mini pizzas with caramelized shallots, a drizzle of honey and walnuts with some boursin may be our favorite appetizer. Much easier than it sounds to put together.

Even though it was a snow day, with the help of my husband and 4 wheel drive, we found a grocery that had not lost power so that I could have the best snow day ever and cook all day.  I made three appetizers and three desserts.  All were good, but only three of the six were good enough to post about or make again.  I thought I would start with Natalie’s favorite, and mine too, a mini pizza with boursin cheese, pears and caramelized shallots. The name is deceiving as this isn’t what I would call pizza even though you start with a pizza crust.

I used King Arthur’s Pizza mix but you could use any type of pizza dough. Our groceries around here don’t carry fresh pizza dough so it’s easier for me to just make my own, it only takes a few minutes.

Caramelized shallots sound ultra fancy but what a great idea on something so small.  I don’t think the flavor is much different than caramelized onions, but these work so much better on these mini pizzas because they are mini!  My shallots were fairly large so I only used three instead of six and that was plenty.  The recipe called for goat cheese, but I know how much Natalie likes boursin so I tried it instead.

I used a 21/2 inch biscuit cutter which was not only the perfect size for these but they look cute with their scalloped edges.  Caramelized onions and pears were a great combination.

Adapted from The Recipe Girl Cookbook 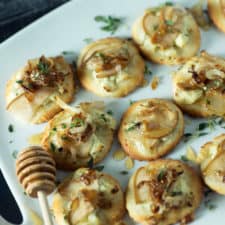 Author: Barbara Curry
Pear mini pizzas with caramelized shallots, a drizzle of honey and walnuts with some boursin may be our favorite appetizer. Much easier than it sounds to put together.
No ratings yet
Print Pin
PREP: 40 minutes
COOK: 10 minutes
Servings: 18