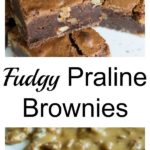 Praline Brownies are rich and fudgy and filled with buttery sweet pralines. Nothing says the South like pralines!  Great for tailgates or parties, a little bite packs a lot of flavor.

I thought we needed something sweet in our lives and what could be better than some fudgy brownies with pralines inside.  What a wonderful combination. These were magical, but I was afraid maybe it was because I haven’t been eating sweets lately. You know how when you’re starving anything tastes great. Not to worry, it has been confirmed by all, that adding pralines to brownies was a brilliant idea. I’m not taking credit for it, the recipe was shared by Food & Wine this month from a chef in New Orleans.

If you’re not from the South, you might not be that familiar with pralines.  I think they originated in New Orleans, but they are pretty popular almost any place south of the Mason-Dixon line. They are similar to fudge, made with brown sugar, butter, cream and of course pecans.

The recipe makes a huge pan of really large brownies, enough to share with lots of friends. I took some to Natalie for Parent’s weekend and gave some to my favorite Tex and Shirley friend. Taylor has eaten her fair share and I still have a large tupperware container full in the freezer. The brownie is nice and fudgy by itself but then you bite into one of the soft praline bits, yum.  They are pretty rich so cut these into smaller portions then you might otherwise.

This is not a simple recipe that you can throw together in 5 minutes, but that doesn’t mean it’s difficult.  You basically have to make two desserts. However, it makes a very large batch and It’s well worth it if you have a little extra time.  You will start by making the pralines because they have to cool before you can add them to the brownie batter.  You can easily do this step a day or two ahead of time.  Once the pralines are cool then you make a batch of brownies and fold the praline bits into your brownies and bake. These freeze really well. 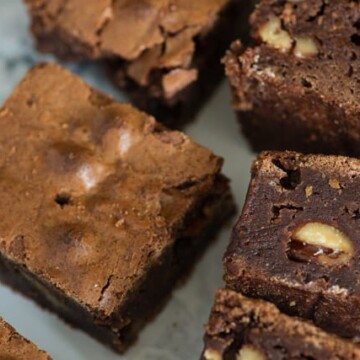 Author: Barbara Curry
Praline Brownies are rich and fudgy and filled with buttery sweet pralines. Nothing says the South like pralines!  Great for tailgates or parties, a little bite packs a lot of flavor.
5 from 1 vote
Print Pin
PREP: 35 minutes
COOK: 40 minutes
Servings: 24