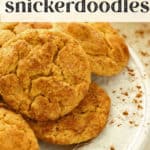 Snickerdoodles with pumpkin and a little spice are reminiscent of an all-time favorite.  Tweak the spices a bit for a better than pumpkin pie spice mixture and a delicious soft pumpkin cookie.

One of my favorite cookies growing up were snickerdoodles. They were crunchy and my mom would let me roll the dough into balls.  We used the tried and true Betty Crocker recipe that calls for crisco and of course, cream of tartar. So with the pumpkin craze going on, I thought I would try a pumpkin version.  Now if you are looking for a true snickerdoodle crunch, my opinion, after many failed attempts is that you can’t get it when you add pumpkin to the dough.  However, you can get something that will remind you of a snickerdoodle.  I had quite the adventure with this experiment.

The first recipe I tried was so sticky, even after refrigerating them overnight, I had a hard time making them into balls.  I was going to throw them out because they came out soft and more cake like, which I hate. Taylor was drifting through the house that day and gave them a try and declared them the best cookie ever.  Well, if she liked them, I thought I could at least work on a recipe that was easier to handle.  For the next attempt I used a recipe from Cooking Classy because it sounded like it would give me a better texture.  I changed up the seasoning a little because Natalie hates anything with allspice.  You still need to refrigerate this dough a bit, but the texture was better, still a soft cookie even after mailing to Natalie.  I gave her a warning that I wasn’t sure about them, and she called to let me know that she also LOVED them.

Clearly it’s just me and my love for crunchy cookies.  Since everyone else loves these, I felt I should share them.  I will admit that the flavor is great and very reminiscent of a snickerdoodle.  I used fresh nutmeg, which really does make a difference.  I added it to the typical cinnamon sugar mix that you roll the cookies in, along with adding some to the batter.  So if you have a little pumpkin left over from all your other pumpkin recipes, give these a try. 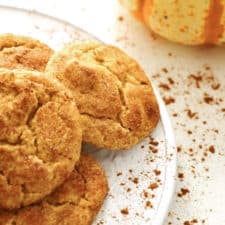 Author: Barbara Curry
Snickerdoodles with pumpkin and a little spice are reminiscent of an all-time favorite.  Tweak the spices a bit for a better than pumpkin pie spice mixture and a delicious soft pumpkin cookie.
No ratings yet
Print Pin
PREP: 1 hour 20 minutes
COOK: 12 minutes
TOTAL: 1 hour 32 minutes
Servings: 48