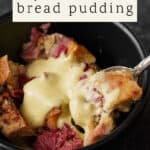 Who can resist vanilla, get a double dose with rhubarb bread pudding. Crusty bread baked in a vanilla custard and rhubarb sweetened with raspberry jam form an amazing bread pudding. Don’t stop there, add a creme anglaise to the top. It’s a show stopper.

Make the creme anglaise in advance so all you have to do is bake the bread pudding. It’s great warm or at room temperature.

Rhubarb is showing up in the groceries, so surely Spring is on its way.  One of the first fruits/vegetables to break through the ground with the promise of warm weather. It’s officially a vegetable but since people in the United States eat it as a fruit, the Customs department declared it a fruit to lower duties on it. Who knew the US government had the power to change a vegetable into a fruit.

Normally I’ll pair it with strawberries which compliment the tart flavor in strawberry rhubarb jam, or berry rhubarb crisp.  However for this rhubarb bread pudding recipe, I used raspberries instead and the combination is delicious.

This is the most amazing dessert, my new favorite.  I‘ve always been a bread pudding fan but no bread pudding I’ve tried can even come close to this one. It’s not too mushy and not overly sweet. Not only is the rhubarb raspberry combination great, but you infuse cream with a vanilla bean and then pour that wonderful infusion over the bread to make a custardy bread pudding.

I’m giving you two choices for a topping. The first is to reduce the raspberry rhubarb syrup and pour it over the baked bread pudding and then top with a scoop of vanilla ice cream.

However, if you really want to put this over the top, make a simple creme anglaise for the topping, The vanilla creamy topping is amazing with the slightly tart rhubarb custard pudding.

This would also be wonderful in the dead of winter when you could use frozen rhubarb. You can buy it frozen or it’s easy to freeze, just wash, dry, and cut into chunks. We can only get fresh rhubarb for a short period of time around here, so I have to resort to frozen most of the time. However, rhubarb is one of those foods that freezes beautifully.

Why you’ll love this

How do you make the perfect bread pudding

Step 1: For the rhubarb mixture. Add rhubarb to raspberry preserves and some water and cook just until the rhubarb is tender but not mushy.

Step 2: Place half of the bread in a baking dish and cover with some of the rhubarb mixture.

Step 3: For the custard, combine butter, cream and milk and brown sugar and scrape the seeds from a vanilla bean into it. Let it simmer, then let it cool for 15 minutes. Once slightly cooled, add it slowly to whisked eggs.

Step 4: Place the baking dish inside a roasting pan and add water coming half way up the baking dish. Bake for about an hour, just until the pudding is set.

Step 5: While the rhubarb bread pudding is baking, cook the reserved raspberry rhubarb liquid until it has reduced by half and is slightly thickened. Pour over the bread pudding and top with ice cream.

How do you make creme anglaise

As an alternative to adding the reduced rhubarb syrup to the top, an equally good topping is to make a simple creme anglaise. This can be made a day ahead and stored in the refrigerator. Just let it come to room temperature before spooning over the rhubarb bread pudding.

Step 1: As you did with the custard, add milk, and cream in a saucepan and scrape the seeds of a vanilla bean into it. Let it come to a simmer and then slowly whisk it into the egg yolks and sugar and return the mixture to the saucepan. Cook this over low heat until it is slightly thickened, about 5 minutes.

How do you keep the eggs from curdling?


When adding the hot cream mixture to the egg mixture, make sure the cream mixture is not too hot, and then gradually add it to the eggs, just a little at a time, whisking the entire time.

How do you keep bread pudding from being dry?


Cooking it in a water bath will keep it from drying out, also, remove it from the oven as soon as the custard has set. The top will golden brown and slightly crisp.

What’s the best way to cut bread into cubes?


Try using a serrated knife or you can tear it into pieces.

What if your bread is fresh?


Dry bread will absorb the custard better than fresh bread, so cut/tear it into pieces and let it sit out on the counter, or place on a baking sheet in a 250º oven for a few minutes.

Can you freeze rhubarb?


Yes, just wash cut and freeze. If you want it to be easy to separate, freeze it on a cookie sheet and then once frozen place in a freezer container. 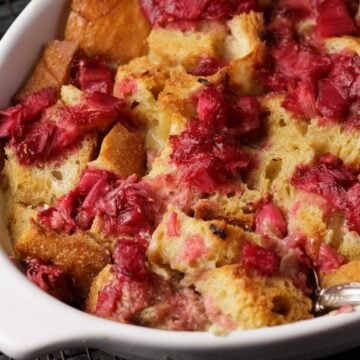 Who can resist vanilla, get a double dose with rhubarb bread pudding. Crusty bread baked in a vanilla custard and rhubarb sweetened with raspberry jam form an amazing bread pudding. Don't stop there, add a creme anglaise to the top. It's a show stopper.
5 from 2 votes
Print Pin
PREP: 1 hour
COOK: 1 hour
Servings: 10