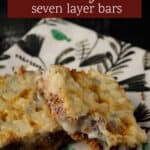 Not your traditional seven layer bar recipe but a gooey bar with Rice Krispies and two types of chocolate for an even better dessert bar.  A great after-school snack or bake-sale treat.

Last week we sent the girls back to college and of course I had to send some goodies with them and what could be better than seven layer bars.  Since I didn’t have to put them in the mail, I had a little more flexibility so I made a new version of my favorite college treat, magic bars or seven layer bars.  A graham cracker based bar with layers of your favorite add ons covered with sweetened condensed milk. Can’t get more magical than that!

The new ingredient in this recipe is Rice Krispies hidden among the layers along with two types of chocolate which make them more gooey if that’s possible. With the added ingredients, they also have more sweetened condensed milk which puts them over the top.

Other than the Rice Krispies,  I added all the standard toppings, but toasted the pecans.  I used two different types of chocolate, melting the milk chocolate on the crust and just letting the semi-sweet chips mix together with the other ingredients while it akes in the oven.  Of course they’re finished off with sweetened condensed milk, with a little vanilla added.

I don’t make a lot of desserts with sweetened condensed milk so if I do, it needs to be worth it like in caramel heath bar cake or toffee shortbread. It’s hard to reproduce the flavor of a seven layer bar without it, and sometimes you just need to splurge a little.

If you’ve never heard of an old fashioned 7 layer bar, you may have called them magic bars which is what we called them in college, for a college student, these were like gold.

While these are heavenly just after they’ve cooled to room temperature, I prefer them refrigerated with more defined layers. You’ll need to let them cool completely before cutting or else you’ll have a gooey mess. If you’re in a hurry, refrigerate the pan as soon as it’s cooled.

How do you make seven layer bars

Step 1: Crush the graham crackers, mix with melted butter and place on the bottom of the pan and bake for 10 minutes.

Step 2: Remove from the oven and sprinkle the milk chocolate over the crust and let it sit for a couple of minutes until it has melted then spread it over the crust.

Step 3: Add add a layer of Rice Krispies, then nuts, then chocolate chips and coconut pressing down after each addition.

Step 4: Combine sweetened condensed milk and vanilla and pour it over the top.

Step 4: Bake for 30 minutes or until golden brown.

There are a couple of reasons that seven layer bars have been around so long. The combination of ingredients makes an addictive bar that everyone seems to love. It’s adaptable so that if you don’t like nuts, or coconut, you can leave them out. You can add whatever type of chocolate you prefer or throw in peanut butter chips or butterscotch chips. They always turn out wonderful no matter what you do to them and you don’t need a lot of equipment to make these amazing bars.


The quickest way to crush whole graham crackers is to place them in a ziplock and pound with a rolling pin. Once the pieces are small roll it over the bag so that it crushes them. You can use any hard object like a wine bottle or a hardback book.

What else can you add to this seven layer bar recipe?


You can add any type of nuts or leave them out. Walnuts are great. Try mixing in butterscotch chips, peanut butter chips, white chocolate chips, or dried cranberries.

How many packages of graham crackers will you need for the crust? 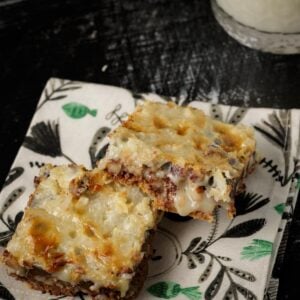