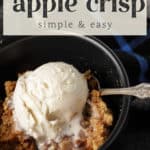 This Apple Crisp recipe is the perfect fall dessert topped with a buttery brown sugar streusel It’s simple enough for a weeknight dessert and easier than an apple pie. It’s a classic old fashioned dessert.

What is Apple Crisp?

An apple crisp is basically cooked apples and streusel. The streusel is mixed with the apples and then also placed over the apples which forms a crispy topping as it bakes.

It’s fall and time to make some apple desserts. If you’re looking for the comforting flavor of baked apples and cinnamon then you’ll love this classic apple crisp recipe. Taylor is my apple lover so after getting some fresh apples at the farmer’s market, we made a simple and easy homemade apple crisp.

The house just smells like fall when you bake apples, it reminds me of my grandmother who loved to bake apples.

With this recipe, some of the buttery streusel topping is mixed in with the apples, because seriously who doesn’t love streusel.  I like adding pecans to a crisp to give it a nice crunch, but then I add nuts to everything.

I mixed my favorite apples, fuji, with some braeborn that were so flavorful. Use your favorites whatever they might be.  Add a scoop of vanilla ice cream and your set, the perfect fall dessert.

What you’ll need for this Apple Crisp Recipe with Oats

You can use any type of apple or a mixture of tart and sweet. I like a fuji apple.

How to make Apple Crisp with Oatmeal

A crisp is so simple to make, you can put it all together in just a few minutes. You can easily prepare this in advance and then put it in the oven while you’re eating and you’ll have a yummy dessert ready by time you’ve finished dinner.

Step 1: Peel and slice the apples. You don’t have to peel them, but I have picky eaters who don’t like the skins. Toss with cinnamon and sugar.

How to cut apples for apple crisp:

To cut the apples for a crisp, first peel them, unless you want to leave the peelings on, this is a personal preference. You can use an apple slicer that cores the apple and slices it into sections or cut the apple in half, remove the core and then slice into ¼ inch slices.

Step 2: Combine flour, brown sugar, nuts and oats and work the butter into it with a pastry cutter or your fingers.

Step 3: Take 1 cup of the streusel and mix it in with the apples. Place the rest on top and bake for an hour until the apples are bubbly and the top is golden brown.

How long to bake apple crisp:

An apple crisp will take about an hour to bake depending on how firm the apples are and how large the slices.

If you need some comfort food to enjoy while the weather is turning cool, you can’t go wrong with a bowl of warm apple crisp.

Tips for this Apple Crisp Recipe with Oatmeal

How to fix soggy apple crisp?

If an apple crisp is soggy, it is probably due to the type of apples used. Try using a firm apple like a fuji, honey crisp or granny smith. A softer apple will not keep its form while baking and will release more liquid causing it to be soggy.

Should you cover apple crisp when baking?

You do not need to cover an apple crisp while backing unless the top starts to get too brown before the apples are cooked. Just check it at about 50 minutes and if it looks too brown, tent it with aluminum foil.

There is nothing quite like vanilla ice cream with a warm apple crisp, but heavy cream poured over the top is delicious along with a dollop of whipped cream. You could also drizzle with a caramel sauce or a caramel cream cheese frosting

Do you have to peel the apples first?

You can leave the peelings on or off, it’s a personal preference but it’s delicious either way.

Can an apple crisp be made in advance?

If you’re going to prepare this in advance, sprinkle some lemon juice over the apples so they don’t turn brown. Cover and refrigerate until ready to bake.

How to reheat Apple Crisp

Let it warm to room temperature and then place in a 350º oven for 15 minutes, or microwave for about 30 seconds.

Does apple crisp need to be refrigerated?

You can store it at room temperature for a couple of days, then it will need to be refrigerated or frozen.

What is the difference between apple crisp and apple crumble?

I’ve found that the terms are used interchangeably. Both have a streusel topping but technically a crisp has oatmeal or nuts to make it crispier.

How long is apple crisp good for?

Apple crisp will stay fresh on the counter covered with plastic wrap for 3 days, after that store in the refrigerator for a week or you can freeze this as a whole or in individual servings. To serve, let it come to room temperature and reheat in the oven at 350º for 10 minutes or more depending on the amount you are reheating.

Adapted from Joy the Baker 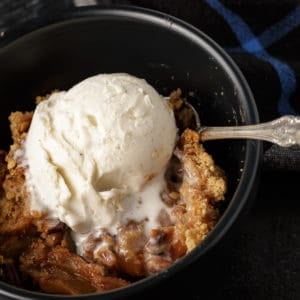