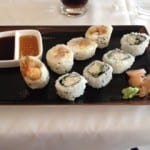 My last review from Orlando is the California Grill.  We tried this restaurant choosing an early seating, 5:40, so we could go back to the parks if we had any energy left.  It’s pretty hard to get a reservation, so book early.  It’s located in the Contemporary Hotel on the top floor where dinner comes with a great view.  We had heard it was dressy, but people were there in shorts and flip flops, so I would say country club casual is more than dressy enough. 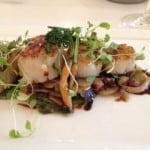 The design is modern with an open kitchen where you can see all the action.  We were seated fairly close and enjoyed watching the efficiency of the large kitchen.  We started with the sushi which is what they are known for.  I had the spicy shrimp roll which lived up to its name.  These were so large that you could make a meal of them.  Next I went with the scallops which we’re cooked perfectly and had a slightly smoky flavor from bacon that was cooked with the sauce.  For dessert we tried the banana fritters which were heavenly.  They were served with 3 dipping sauces, but they were so perfect without the sauce that I hated to take away from the great flavor and texture by dipping them. 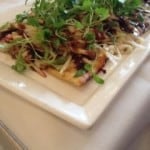 We had a great dining experience and I would make a point to try this when you go.  I thought it was nice how they also catered to children. We noticed pretty cool rice krispie type desserts with M&M’s on top going by our table. Another plus is that you get a ticket to come back and watch the fireworks if you are not eating dinner at 10 pm.

This is my last restaurant post for a while and I will be back to sharing some great recipes.