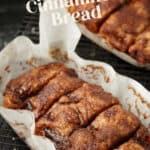 There’s nothing quite like the iconic Dollywood Cinnamon Bread. Coated in butter and brown sugar and cinnamon, this soft pull-apart bread is a must try. Your family will love this gooey breakfast treat.

While cinnamon rolls are my all time favorite weekend brunch treat, this gooey, light as a feather Dollywood cinnamon bread is a close second. The girls just love this stuff and I even had my “not sweet eating” husband digging in. The hardest part is waiting for it to cool long enough so that you don’t burn your mouth.

Don’t take my word for it, this recipe gets more visits than any other recipe on Butter & Baggage!

Try serving it with a savory quiche or a ham and potato breakfast casserole, the sweet and savory are a great combination.

This recipe came about because of a trip we had to cancel to Dollywood. Natalie is my roller coaster loving daughter but somehow she was born into a family that doesn’t like roller coasters. I have bad motion sickness so over the years, I just stand at the bottom and wave. She and my husband had a trip planned to Dollywood over the past year that they had to cancel.

She was so disappointed on missing out on the roller coaster but also she wouldn’t get to try the famous Dollywood Cinnamon bread. So of course I had to try to recreate it.

There are “official” recipes out there that have been sanctioned by Dollywood, so I started there and made a few changes here and there. We ended up with an amazing cinnamon bread that is coated with butter and then brown sugar and cinnamon.

The super soft dough is light as can be, you can eat a loaf by yourself before you even realize it! 🙀

This cinnamon pull-apart bread is different from the Dollywood version in that theirs is topped with a powdered sugar glaze and served with apple butter. We tried it with both of these additions, and preferred this version much better.

The cinnamon bread is pretty sweet and adding a frosting on top was too much for even my sugar lovers. Apple butter, while delish, was just lost on this bread and we didn’t like the combination.

The texture is so light and fluffy, nothing like a hearty apple cinnamon bread made with oatmeal. It makes smallish loaves so if you have a crowd, double the recipe.

Where can you find Dollywood Cinnamon Bread

Dollywood is a theme park located in Pigeon Forge Tennessee in the Smokey Mountains. The area is a popular tourist attraction due to its beautiful location and this theme park. The park boasts the world’s fastest wooden roller coaster and of course cinnamon bread. It’s made daily and can be purchased at The Grist Mill within the theme park.

While this might sound like a cinnamon roll just baked in a loaf pan, it is very different. The dough itself is much softer than cinnamon roll dough. This is what makes it so easy to pull off sections. Also the topping is not just brown sugar and cinnamon, it has a little corn syrup which makes it gooier than a cinnamon roll. You’ll need a napkin!

What you’ll need to make it

What is unique about Dollywood cinnamon bread is the way it’s formed after the dough has risen. In order to achieve gooey topping in each bite, slits are cut deep into the dough and then the dough is dipped into butter and then into a brown sugar cinnamon mix. The slits allow not only glaze on every bite, but it makes it easy to pull off a section of the bread to eat.

How do you make Dollywood Cinnamon Bread

Step 1: you need some yeast

Let the yeast proof for a couple of minutes in some warm water and then add it to the dry ingredients with some melted butter.

Knead for about 5 minutes with a dough hook in a stand mixer, cover and let it rise in a warm place. When you poke your finger in, it should leave an indentation.

Combine brown sugar and cinnamon in one dish and melted butter and corn syrup in another.

Cut 4 deep slashes across each loaf, and then dip both sides into the butter/syrup mixture.

Coat each loaf in the brown sugar/cinnamon mixture making sure you get into each of the cuts you made in the dough.

Place the loaves in parchment paper lined loaf pans and drizzle the remaining butter over the top, then sprinkle with remaining brown sugar mixture.

Bake for about 30 minutes and then let cool for about 15 minutes if you can.

Bread flour has a higher protein content than All Purpose flour which will result in a higher gluten formation. In addition, it will absorb more liquid. The bread flour will give your loaf more structure. That doesn’t mean you can’t use All Purpose flour for this or any bread recipe. The texture may be a little different but it’s not significant enough to notice once all the gooey topping is added.

Can you substitute All Purpose flour for Bread flour?


You can substitute All Purpose flour in this cinnamon bread recipe. The texture might be slightly different but not enough to make a difference in the final outcome.


An Amish Cinnamon bread, is more bread like with cinnamon swirls while Dollywood cinnamon bread is more like a cinnamon roll than a bread.

Can you double the recipe?


Yes, this recipe makes two small loaves, so if you’re feeding a crowd, double the recipe.

Can you freeze cinnamon pull-apart bread?


If you happen to have any left over or made an extra loaf, you can freeze it and re-warm in the oven once thawed. It will not be quite as good as fresh out of the oven, but still delcious.

Can you refrigerate the dough overnight?


Yes, once you have formed the dough into rectangle shapes, cover it tightly with plastic wrap and refrigerate. Let it sit at room temperature for about 20 minutes and then cut and coat the loafs.

If you’ve had the cinnamon bread at Dollywood, let me know how this one compares. 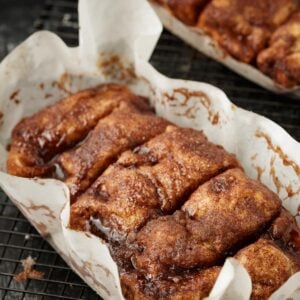 Author: Barbara Curry
There's nothing quite like the iconic Dollywood Cinnamon Bread. Coated in butter and brown sugar and cinnamon, this soft pull-apart bread is a must try. Your family will love this gooey breakfast treat.
5 from 17 votes
Print Pin
PREP: 2 hours
COOK: 25 minutes
Servings: 6