I signed up for the swamp rabbit ½ marathon back in November, thinking that it would be the perfect excuse to go to Greenville and visit our college student.  I run on the swamp rabbit trail every time I go to Greenville and love how flat it is, so this sounded like the perfect race.  It was 10 weeks after my race in Kiawah and I was hoping to improve on my PR.  What I was not expecting was for it to still be winter.  The day before it was 55º so it was just the luck of the draw that it was 30º with a wind chill of 17º. It has been a cold winter in North Carolina so I felt that I was prepared for the cold but I have never run this long or far in that kind of cold and wind.  My lips were numb at the end.  We were trying to talk and felt like we had just come from the dentist. 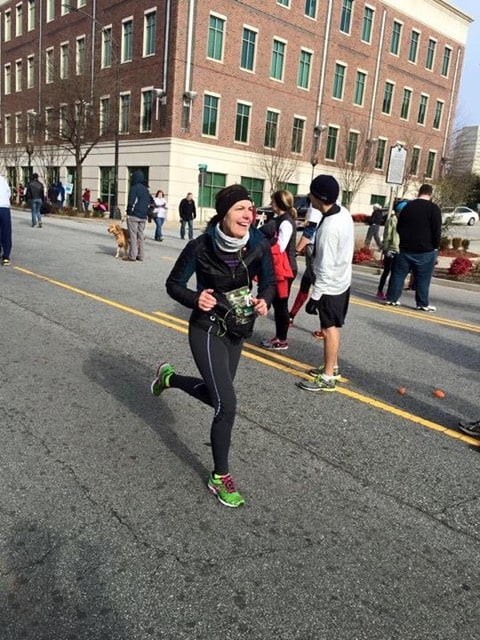 Weather aside, the swamp rabbit run from Travelers Rest to downtown Greenville was a great race.  It’s downhill or flat until the last mile and a half or so. You have a pretty good steady hill to the ball park and then it goes down a bit and comes up for the last ¼ mile to the finish.  Well I didn’t make a PR but much to my amazement, I got first place in my age group.  I’ve never done that and was so surprised.  I guess I wasn’t the only one who struggled with the cold.  The younger folks were super fast as there was prize money for the top 5 women and men.  It was a low key race with 1300 signed up and a little over 1000 runners.  It was never congested even though the trail is not that wide. They also have a 5K run that starts and finishes downtown.  The race started at Travelers Rest and they had a shuttle that would take you there for the start.

They did a great job directing the runners and stopping traffic and packet pick up was easy.  I was disappointed that there wasn’t any food at the end.  I like to eat a banana or orange or something but they just had water bottles.  This is only the second year for this race, and my guess is that it will become popular as more people hear about it.  Looks like I will have to go back next year to defend my title.  The medals were pretty cool with a picture of the bridge and river.  So next year, sign up, it will help keep you training during the winter, even if you have to run on the treadmill like I did for the two weeks leading up to the race.

Other than winning, the best part was going to Bacon Brothers for some ribs afterwards. This is one of my favorite restaurants, especially because only the locals know about it.  It’s off the beaten path but some of the best beef and pork you will find.