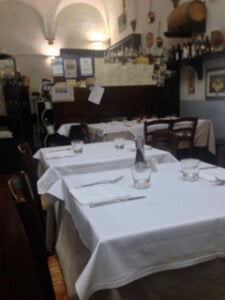 For our first night  of our empty nest trip to Italy, we tried a local place where we were the only tourists and very little English was spoken.  Most Italians speak a little English as all non-Italian tourists use English as their second language, and we can recognize most foods on a menu, so we weren’t too concerned.  Our plan for this trip was to share each course so that we could try different things.  We’re just not used to eating a three course meal for lunch and dinner. However after climbing up 100’s of rickety steps in the old tower, we were ready to eat!

Just a word on eating in Italy, they are food pushers.  If you leave food on your plate, that must mean you didn’t like it, not that you have eaten more food then a human was meant to eat in one sitting.  They also have free starters, bread and then second dessert.  This is generally an entire tray of small cookies, tarts and other sweet things that are brought after dessert. 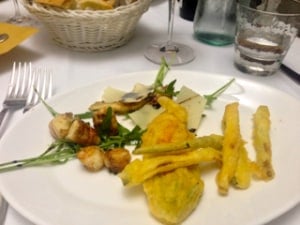 The owners of this family style restaurant came to our table right away and made some suggestions and let us order one course at a time.  They even split everything for us in the kitchen.  This could be my favorite restaurant of the trip. We started with stuffed zucchini blossoms which were very lightly breaded and sautéed. I have never seen these in the grocery or at a farmers market but they sell them at the markets there and I have seen others blog about them, so they must be available in the States. This was followed by pumpkin stuffed ravioli, which were home made of course. I could have just had more ravioli but that would have been frowned upon.  Since we split the portions we were able to order a main course, a pork dish which the owner said was his favorite.  It was served with roasted vegetables on the side.  We ended with a chocolate cake with marscapone cream. The atmosphere was simple, nothing fancy, but comfortable with a few tables outside. 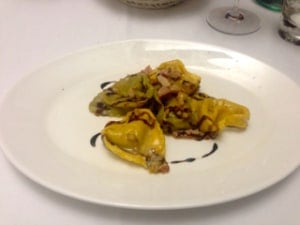 From our cooking class we learned that in the Bologna region, they don’t mix their food or flavors.  This means you wouldn’t have a sauce with gorgonzola and pancetta and your vegetables come on a separate plate from the meat.  My guess is that since the ingredients are so fresh, that you don’t need to add more than one flavor to a dish to make it amazing.

This place was a short taxi ride from the town center but well worth finding a non tourist spot.  Dinner lasted 2 ½ hours on this night and every other night that we spent in Italy, I had to take a short nap every day just to stay up this late. 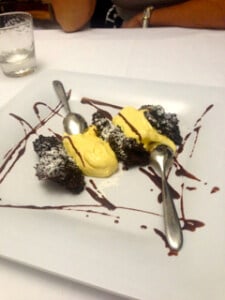