Bacon wrapped pork tenderloin has so much flavor and it’s not greasy at all. Peach jam adds just a hint of sweetness to this amazing dish.

I live in NC, the pig capital of the world it seems, but for some reason I could not find any pork tenderloins last week. I went to three places before I finally found one.  I don’t think I’ve ever gone to the meat section of a grocery and not found pork tenderloin, so this was a little weird. After my third grocery, I was on a mission. Since then, all the groceries have it in stock so I guess everyone else was making pork tenderloin for dinner and who can blame them.

There are so many great ways to fix pork tenderloin, with a  creamy marsala sauce or with cherries.  However, I’ve never tried wrapping it in bacon so I decided to give this a try.

The bacon doesn’t make it greasy as you might expect, I think it just holds in the flavor.  You can remove the bacon before serving but it looks better if you leave it in place. Anytime I make this, I use my homemade peach jam with vanilla and Bourbon, but any peach jam will work. It has big chunks of peaches, I can just eat it right out of the jar.

The slightly salty bacon and sweet jam are a perfect topping for pork.  While cooking, the jam caramelizes with the bacon.  YUM.

What temperature should you cook pork tenderloin

I had a pretty large tenderloin and the center was a little more rare than I prefer.  We just ate both ends and I cooked the leftovers a little more when I re-heated it.  To prevent this from occurring use a thermometer and let the center heat to 145º and then let it rest for 10 minutes. (I didn’t let mine rest ) It should increase the internal temperature by 10º and be a perfect 155º.  It’s recommended that pork be cooked between 145º and 160º.

If you can find a tenderloin that’s the same size and not thicker in the center, it will be easier to have all the slices the same level of doneness. However, if you have folks that want their meat well done, a tenderloin that is smaller on the ends will make everyone happy.

While this recipe had the extra step of wrapping it in bacon, I thought it was worth the time, plus who doesn’t love to play with food.

What could you serve with bacon wrapped pork tenderloin

If you make Bacon Wrapped Pork Tenderloin, be sure to leave a comment and/or give this recipe a rating! Above all, I love to hear from you guys and always do my best to respond to each and every comment. And of course, if you do make this recipe, don’t forget to also tag me on Instagram! I would love to see your creation. 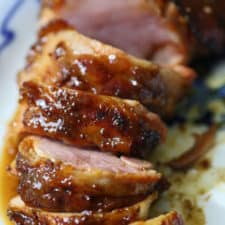