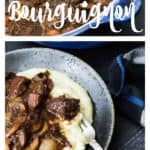 Beef Bourguignon is well worth the time it takes.  The beef cooked in wine for a couple of hours is one of the most savory delicious meals you can find. Don’t shy away from the multiple steps, you will love every bite. Julie Child knew what she was talking about.

The girls and I were inspired  to try something from Julia Child’s cookbook after watching Julie & Julia again a few weeks ago.  I haven’t made anything challenging lately and while Taylor wanted to bone a duck, I wasn’t sure where I would even find one, so I chose Beef Bourguignon.

Of course you have to say it like Julia did.  Before I get to the ingredients, you have to have a covered enamel dish like a dutch oven that can be used on the stove and the oven, you can’t make this without it. In addition, you will need two more skillets and a saucepan.

I started at the butcher, after telling him what I was going to attempt, he suggested using a chuck roast that he offered to cut into chunks for me. So that was at least one step I could avoid.

Next I had to search for pearl onions.  I thought that surely Fresh Market would have them, but no.  I was thinking I would have to use the frozen ones but I found them at Harris Teeter.  I have never had a need for pearl onions so I’m not sure who cooks with these enough for a regular grocery to carry them.

After braising them, I have a new appreciation for the flavor they can add.  However, I now use the frozen pearl onions and I don’t think you will be able to tell the difference. After going to the butcher and two groceries, I was ready to start the adventure.  I made a few adjustments to the recipe. I decided I didn’t need a 6 ounce chunk of bacon that I would have to simmer then drain and dry.  I went with just regular bacon.

I began at 2:30 in the afternoon and after reading the recipe through several times, I browned the bacon and then the beef, removed them from the pan and sautéed the onions and carrots. Next you put the meat back in your enamel pan and add a little flour and brown it for a few minutes in the oven.

Then you put it back on the stove and add lots of wine and some beef broth, bring to a simmer and place it back in the oven at a lower temperature, cover and cook for 2 ½ to 3 hours.  That took about 30 minutes.

While it was cooking away in the oven, I had to braise the onions and brown the mushrooms.  I started with the onions since they have to simmer after browning for 40 minutes.  Before I could brown them, I had to peel 18-24 pearl onions.  This is why no one cooks with pearl onions anymore!

Once peeled, you brown them, add wine and simmer until they are tender and smell fantastic.  Once they were in the simmer stage, I sautéed the mushrooms, this wasn’t hard or time consuming, but if you watched the movie, you know, “don’t crowd the mushrooms”.  I experimented with flipping them and lost a few on the floor but had fun. I just set the onions and mushrooms aside until the beef was done.

You would think that would be enough, but no, there is more.  You remove the beef and drain the fluid into a saucepan putting all but the meat back in your original pan. Place the onions and mushrooms over the beef.  In a sauce pan, cook the juices down until it is slightly thick and then pour this amazing sauce over the beef.

At this point you can stop and put it in the refrigerator and serve it the next day, or just bring it to a simmer and serve.  From start to finish it took me 31/2 hours.  Now I wasn’t cooking the entire time, but there are lots of steps and this requires a lot of work. If you are serving it for company, I would suggest making it the day before.  In making this again, I have been able to take some short cuts but it still takes me 2 hours of prep time during the whole process.  Most of that is done while the beef is cooking, but still you have to be committed.

Your question might be, is it worth it.  All I can say is “yum”.  The flavor from cooking it slowly in wine and adding the braised onions and mushrooms is hard to describe. This might help, we all wished we had bought bread so we could sop up the extra sauce after we devoured it.

I picked up a baguette to eat with the leftovers the following night.  Since then we have decided that it is great over mashed potatoes.  I can’t remember making anything with so much flavor.  You just want to savor every bite. So yes it is worth it, maybe not every week but for special occasions or to impress someone special.  This is the first recipe I have tried from her cookbook, and while I cook quite a bit, I think a novice cook could follow these directions.

She gives lots of helpful instruction where needed.  We are so used to having pictures all along the way, I think it takes great skill to put a recipe like this into words.  I tried to take some photos along the way.  My advice is don’t shy away from these complicated recipes.  Developing great flavors sometimes can take time and a little more effort.  So Bon Appetit.

Adapted from Julia Child’s Mastering the Art of French Cooking 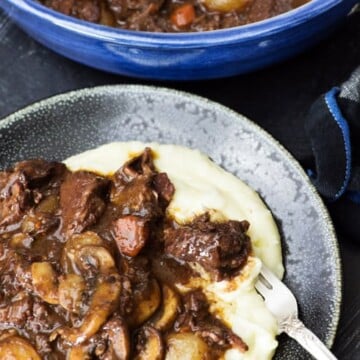 Author: Barbara Curry
Beef Bourguignon is well worth the time it takes.  The beef cooked in wine for a couple of hours is one of the most savory delicious meals you can find. Don’t shy away from the multiple steps, you will love every bite. Julie Child knew what she was talking about.
5 from 1 vote
Print Pin
PREP: 2 hours
COOK: 2 hours 30 minutes
TOTAL: 4 hours 30 minutes
Servings: 6