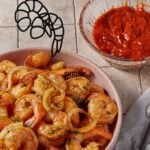 This marinated shrimp recipe will take your shrimp cocktail to the next level. Marinated overnight in an Old Bay lemon dressing, they’re so good you won’t even need cocktail sauce.

Whether it’s hot outside and you don’t want to turn on the oven, or you’re having friends over and want an appetizer that will get their attention, give this marinated shrimp recipe a try.

It’s simple to make and marinates all night so the flavors seep into the shrimp. You’ll have a no fuss healthy dinner or a delicious appetizer. It’s especially great on those scorching summer days when you want a cold dinner. Throw in some simple homemade biscuits or a loaf of Irish soda bread and that’s all you need.

You could throw in some veggies and add a creamy cucumber salad or a corn and blueberry salad.

If you love the flavors in an Old Bay seafood boil, then you’ll also like this recipe for marinated shrimp, they both have my favorite Old Bay seasoning.

The marinade is mostly lemons, you’ll need 6 of them. Added to the lemon juice is Old Bay seasoning or you can use crab boil seasoning. You can find them both on the spice aisle in the grocery store.

The marinated shrimp are lemony but not spicy. If you want a spicy kick, then add some cayenne to the marinade or some sliced jalapenos.

While no sauce is needed, a little cocktail sauce is always great for a boost of flavor to cold shrimp.

When the weather starts to get a little cooler, try you hand at making crawfish etoufee using frozen crawfish, it’s great when you have a crowd.

What’s the best way to cook shrimp for shrimp cocktails

The easiest way to cook shrimp for shrimp cocktails without over cooking them is to add them to boiling water for about two minutes, if using medium to large shrimp. Smaller shrimp will take less time.

When you roast or saute the shrimp, it seals them so that the marinade will not absorb into the shrimp as well.

You can save a little time and buy shrimp that has already been boiled, but it really doesn’t save you that much time and it costs quite a bit more. When I’m in a hurry or just don’t feel like peeling the shrimp, I’ll get raw shrimp that has been peeled. For me, it’s worth the extra money not to have to peel them.

What is cocktail sauce

Shrimp is frequently served with cocktail which is made up of ketchup, chili sauce, Worcestershire sauce and Lemon juice, but the distinct flavor of cocktail sauce comes from horseradish. You can find it pre-made in the ketchup section of the grocery or it’s easy to make your own. This shrimp cocktail sauce looks pretty good.

First boil the shrimp. They only need to be in the boiling water about 2 minutes and then chill them in an ice bath to stop the cooking. Be sure to drain the shrimp thoroughly.

In a large glass bowl, layer the shrimp, garlic, onion, bay leaves parsley and 6 of the lemon halves. Pour the lemon dressing over the top and stir to combine. Cover with plastic wrap.

Place the bowl in the fridge to marinate overnight or up to 24 hours.  Just drain and serve.

Pro tip: This shrimp with lemon has so much flavor that you won’t need cocktail sauce, although it’s still a nice addition.  If you want to make it a bit more interesting, add some cayenne, hot sauce or fresh jalapeños to the onion, lemon mixture.

I love cold food on hot summer days, especially when you can make dinner the day before.

What goes well with shrimp salad

If you are making this a meal, try adding some zucchini packets or if you want a completely cold dinner, add a broccoli salad or Ranch potato salad.

Can you pan fry the shrimp instead of boiling it?

For marinated shrimp, it is best to boil the shrimp so that the marinade can seep into the shrimp. Pan fried shrimp will not absorb as much of the flavor from the marinade.

You can keep marinated shrimp in the fridge for about 3 days. It’s best to freeze any leftovers. You can freeze in an airtight container or freezer bags where they will stay fresh for about 3 months. 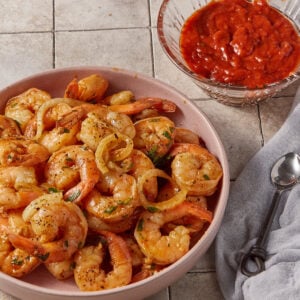