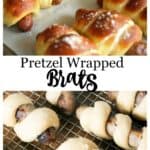 Pretzel Wrapped Brats are bratwurst or sausage wrapped in a fabulous pretzel dough, boiled and then baked. Takes a bit of time to let the dough rise, but so worth it.  A grown up version of pigs-in-a-blanket.

OMG pretzel wrapped brats may be the best thing I’ve made all summer.  Soft pretzel dough surrounding fresh bratwurst from a local butcher.  As if bratwurst is not great all by itself, I boiled them in a beer and onion broth and then grilled them before wrapping them in the most amazing pretzel dough.

I have to give a disclaimer, this recipe does take some time, but let me tell you they were phenomenal.  If you’re feeling reminiscent of childhood pigs-in-a-blanket, think of this as the gourmet version.

You don’t have to use bratwurst, Italian or smoked sausage would also be great.  I think we liked the pretzel bread even more than the sausage because when I suggested that there was a lot of bread and we could have used less dough per sausage, I was met with resistance.  But really, the dough is enough for eight and the second time I made these I made made it into eight and it was perfect.  I have a feeling I will be making them again for Taylor when she comes home at the end of the summer, if not sooner.

The only drawback to these is the time involved when making any yeast dough.  If making these for guests do everything up to boiling them and put the wrapped sausages in the refrigerator.  This will stop the dough from continuing to rise. Then your friends can help, boiling dough is fun and a good way to get everyone involved. Don’t forget to add the salt to the top of the pretzel dough while they are still damp, it stays on better that way.

Watch them carefully in the oven, you don’t want to get them too brown, but they need to cook long enough for the dough to cook all the way through. Since the sausage is already cooked before they go in the oven, you don’t have to worry about whether your sausage is done or not.  If they’re getting too brown, you can cover them with aluminum foil.   These are great served with a side of spicy mustard.

Adapted from Sweet  and Vicious 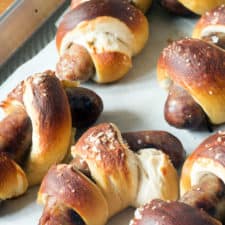 Author: Barbara Curry
Pretzel Wrapped Brats are bratwurst or sausage wrapped in a fabulous pretzel dough, boiled and then baked. Takes a bit of time to let the dough rise, but so worth it.  A grown up version of pigs-in-a-blanket.
5 from 1 vote
Print Pin
PREP: 2 hours
COOK: 20 minutes
Servings: 8