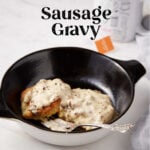 Fresh biscuits get an upgrade when smothered with Old Fashioned Sausage Gravy. Breakfast sausage adds loads of flavor to this hearty white gravy your friends and family will love.

An Old Fashioned Sausage Gravy recipe is a rich, comforting classic that comes together in only 20 minutes. Pour the perfectly seasoned gravy over freshly-baked biscuits and you’ll have a dish that no one can resist.

Generations of families in the South were raised on this popular gravy that’s often served over buttermilk biscuits or chicken fried steak. Most would agree it’s as iconic as fried green tomatoes, etouffee and peach cobbler.

Amazingly, only five simple ingredients make something that’s so delicious. Pork breakfast sausage mixed with flour, milk, melted butter and salt is all you need for this hearty homemade sausage gravy recipe.

Many people in the Midwest are familiar with Bob Evans sausage gravy since the well-known company is based in Columbus, Ohio. While this recipe is similar, theirs is more  of a brown gravy.  My recipe is more like Cracker Barrel’s sausage gravy.

Normally we serve homemade sausage gravy with sour cream fat head biscuits, either for breakfast or dinner. But you can also try it over the top of eggs and toast, pork chops or crispy roasted potatoes. Be creative and try serving it with chicken tenders and of course it’s amazing over mashed potatoes.

Southern biscuits and gravy became popular in the 1800s after the American Revolutionary War. During that time food and money were in short supply and cooks needed to get creative with what they had. Both biscuits and gravy still provide stick-to-your-ribs goodness despite their basic ingredient list.

You may have heard the term country gravy and wondered if it’s the same thing as sausage gravy. Country gravy is similar but made without meat. There’s also bechamel sauce, which is like country gravy but thinner. I use it in my homemade lasagna, baked mac & cheese and broccoli cheese casserole.

What you’ll need to make a sausage gravy recipe

Sausage – breakfast sausage will give you the best flavor, my favorite is Neese’s which is popular in North and South Carolina and parts of Virginia.

Butter – one teaspoon is all you’ll need.

Milk – whole milk is what I use, but you can substitute half-and-half to make it richer, 2% will make a thinner gravy that still has lots of flavor.

How to make biscuits and sausage gravy

Cook the sausage until crumbly and brown.

In the same pan add a little butter and sprinkle in the flour, make sure the flour is fully incorporated into the fat before slowly whisking in warm milk. If you pour too fast you may end up with lumps.

Simmer the mixture for about 5 minutes, occasionally scraping the sides and bottom of the pan. Cook until it thickens.  If it gets too thick, just stir in more milk. (it’s a very forgiving recipe)

Pro tip: The gravy will thicken as it cools, just add a little milk and rewarm in the microwave.

No-fail Puff Pastry Rolls are wrapped in a flaky crust

Flour is the best thickener for sausage gravy. Remember, as it cools it will get thicker. You can thin it down by adding more milk.

Can sausage gravy be made ahead of time?

Cook it up to five days ahead of time and let it come to room temp before reheating. You may need to thin it down with a little milk. Store in an airtight container in the refrigerator until you’re ready to use it.

Can sausage gravy be reheated?

It’s easy to reheat gravy in the microwave or on the stovetop over low heat. If it’s too thick, thin it with a drizzle of milk. 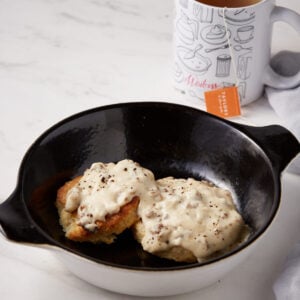 Author: Barbara Curry
Fresh biscuits get an upgrade when smothered with Old Fashioned Sausage Gravy. Breakfast sausage adds loads of flavor to this hearty white gravy your friends and family will love.
No ratings yet
Print Pin
Servings: 4