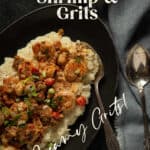 Southern Shrimp and Grits are a longstanding Southern staple. Creamy grits made with milk and cheese are topped with sautéd shrimp in a flavorful sauce. An Iconic dish that’s simple to make for a fabulous weeknight dinner, or impressive enough to serve for friends.

My study abroad child will be coming home soon and has requested Southern food, which for her means grits and biscuits.  I went with Southern shrimp and grits, there’s nothing that says Southern comfort food than a dish made with grits.

I’m not talking about instant grits, no self-respecting Southerner would make instant grits. If you live north of the Mason-Dixon line you may have to order them. My favorite come from The Old Mill at Guilford where they are stone ground. They come white and yellow, I always go white.

Grits originated with Native Americans and are now a staple for breakfast in the South. Grits are made from ground corn, either yellow or white. They have a mild corn taste, not as strong as cornmeal which makes them great by themselves with butter or cheese but also a fabulous choice to pair with more flavorful dishes like shrimp!

There are basically two types of grits to choose from:

I hope you always choose stone ground grits and avoid the instant variety, but remember it will take you 20 minutes to cook the grits.

Do you remember the grit discussion in My Cousin Vinny, it’s what broke the case:

Vinny Gambini: How could it take you five minutes to cook your grits when it takes the entire grit-eating world 20 minutes?

Vinny Gambini: What? I’m sorry I was over there. Did you just say you were a fast cook? Are we to believe that boiling water soaks into a grit faster in your kitchen than any place on the face of the earth?

Vinny Gambini: Perhaps the laws of physics cease to exist on your stove. Were these magic grits? Did you buy them from the same guy who sold Jack his beanstalk beans?

The trick to good southern grits, is first to not use the instant kind, and follow Joe Pesci’s advice and cook them slow this allows the milk to be absorbed creating a creamy texture.

If you don’t want to mess with the grits on the stove, you can cook them in a slow cooker.

Where did shrimp and grits originate from

Shrimp and cheesy grits are a Southern creation, thought to have originated in Charleston South Carolina where shrimp were plentiful and they were added to grits for breakfast. Since, grits with shrimp has become a dinner time specialty and became well known around here from a local restaurant in Chapel Hill, NC, Crooks Corner.

How to make Southern Shrimp and Grits

Boil milk and gradually add grits. Turn to low and simmer for at least 20 minutes and they are creamier if you can cook them for 30-45 minutes stirring frequently. Before ready to serve, add butter, cheese and extra milk if needed.

Pro tip: While you can use water and still have fairly good grits, if you use whole milk they are so much better, and if you want to be decadent, use cream.  Since I used milk, I added a little fresh Parmesan which I think is just right with shrimp.

First remove the shells and devein the shrimp. Season them with salt and pepper. Heat butter and oil in a large skillet over medium-high heat until melted and foamy. Add sausage and onion and sauté until the onion is tender and the sausage is browned, 5-6 minutes.

Add the shrimp and cook for 1 minute per side on medium heat. Once they are opaque, remove with a slotted spoon to a bowl. Add the tomatoes to the pan with a big pinch of salt and pepper and cook, stirring, until they have softened another 3-4 minutes.

Stir in wine and reduce until almost dry, about 3 minutes. Stir in heavy cream and reduce slightly.

Return the shrimp to the pan and cook for another minute, just to warm them up.

Place grits on a plate and top with the shrimp mixture. Garnish with green onions. It’s a meal in itself, although a mixed green salad is a nice compliment.

The sauce on this is so creamy and flavorful which is why it’s scrumptious over grits. My motto is a little flavor goes a long way.  This was a hit for my homesick Southerner.

Ground corn, made from yellow or white corn that is cooked slowly with milk or water to create a creamy hot cereal like dish typically served for breakfast with butter or cheese.

Are grits and cornmeal the same thing?

Both ingredients are made from dried and ground corn but grits are more coarse, cornmeal is more finely ground.

Is shrimp and grits a Southern meal?

The humble meal came from a mixture of cultures, from sailors and African americans cooking it up for their families. It is common to see in restaurants in the South especially those ares close to the coast.

Do you serve bread with shrimp and grits?

A crusty loaf of bread pairs well with this meal. But shrimp and grits can be served on its own as well.

Are grits the same as polenta

Grits are not the same as polenta. Polenta is made from a different type of corn and are therefore the texture is not as creamy as grits.

Enjoy some other delicious Southern dishes 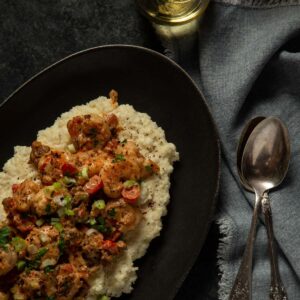 Author: Barbara Curry
Southern Shrimp and Grits are a longstanding Southern staple. Creamy grits made with milk and cheese are topped with sautéd shrimp in a flavorful sauce. An Iconic dish that's simple to make for a fabulous weeknight dinner, or impressive enough to serve for friends.
5 from 1 vote
Print Pin
PREP: 15 minutes
COOK: 45 minutes
Servings: 4

Shrimp and Sausage with Sauce

Shrimp and Sausage with Sauce