Snickerdoodle Blondies with cinnamon chips give you the great taste of snickerdoodle cookies but in bar form. Basically a cinnamon blondie!

Snickerdoodles are one of my all time favorite cookies, so when I found this adaptation, I couldn’t wait to try it.  Blondies are so easy and these were no exception.  The house smelled so cinnamony.  This calls for cinnamon chips, and I don’t think you can substitute anything else and still achieve the great taste.

I couldn’t find them in the grocery, so ordered from amazon, but I can find them at Target sometimes. Mine were Hershey’s.  The chips give this so much more flavor then cinnamon alone.

If you’re a snickerdoodle fan, you are going to love these. 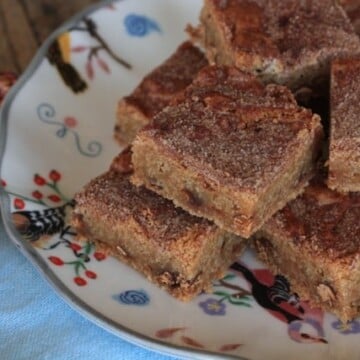