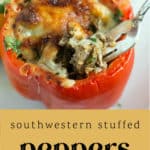 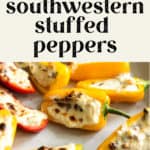 Peppers stuffed with Southwestern seasoning are great, but when you add riced cauliflower, you get an even healthier version.

Even if you’ve been cooking with it for years, you might be surprised how much it adds to the flavor of these stuffed peppers.  I’m a little strange when it comes to peppers.  I love them raw or stuffed but hate them chopped up in anything.  Normally they are stuffed with a tomato, rice, and a hamburger mixture. These are so much better than the traditional version.  I ate the left overs every night for dinner last week and I can’t wait to make another batch, they are that good. Instead of rice, you add riced cauliflower to your hamburger mixture. These took on a Southwestern flare with taco seasoning instead of tomatoes.

We should be seeing fresh peppers pretty soon around here and this is the best version of stuffed peppers I’ve tried.  I added a little pepper jack cheese and fresh mozzarella to the mixture, which was a perfect combination. Sometimes, I make a new dish and by the time I sit down to eat it, I’m starving and almost anything tastes good.  However, after three nights of these, they were just as impressive as the first time around.  This recipe is a great excuse to try riced cauliflower and as I’ve mentioned, it’s super easy to make as long as you have a food processor. (check out Lime Cauliflower Rice)

This is one of those dishes where no one will be able to tell it contains cauliflower, yet the cauliflower adds something to the ground beef that I think you will love. The real test will be if I can get my cauliflower hater to try it!  I shared some with a friend and he microwaved them which makes the pepper a little soggy, I would suggest re-heating them in the toaster oven. 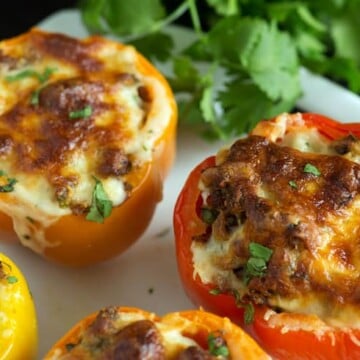 Author: Barbara Curry
Peppers stuffed with Southwestern seasoning are great, but when you add riced cauliflower, you get an even healthier version.
No ratings yet
Print Pin
PREP: 20 minutes
COOK: 40 minutes
Servings: 6