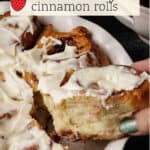 Soft and rich homemade strawberry cinnamon rolls that you can make overnight are a great way to start off any weekend or holiday. Plenty of butter and strawberry jam, with a tangy cream cheese frosting.

I just finished making my last batch of strawberry jam for the season and decided to add some to a batch of homemade cinnamon rolls. This recipe makes two large pans of rolls, so I made half plain and half with strawberry jam. While I love a traditional cinnamon roll, and adding strawberries was heavenly.

Cinnamon rolls made with butter really don’t need a frosting, but a cream cheese and butter frosting adds just the right amount of tang and is a nice compliment to the strawberry flavor. I prefer it over a powdered sugar icing any day. Add some caramel to it and serve over apple cinnamon rolls in the Fall.

Instead of adding the jam to the top of a melted butter layer, try creaming the butter with the sugars and cinnamon, this makes it easier to spread the mixture over the dough.

It also keeps everything from falling out when you roll it and guarantees a cinnamon buttery mixture in every bite. If you’re using an overly sweet jam, you could reduce some of the sugar that you add to the filling.

The best part about making a large batch of cinnamon rolls is that you can freeze some for when you have overnight guests or want to share with friends. Just wrap them in foil and warm them in the oven and you have instant bliss.

How to freeze cinnamon rolls

You have two options for freezing cinnamon rolls. The first option is to bake them until they have just started to turn brown but have not cooked through. Remove them from the oven, let cool completely and then wrap in plastic wrap and freeze. When you’re ready to serve them, take them out of the freezer the night before to thaw and let them come to room temperature in the morning. Bake for about 10 minuets at 350º to complete the cooking.

While that method works and keeps them from getting dry, I’m reluctant to give someone homemade rolls that are not completely cooked. So for the second option, I prefer to bake them as directed, let them cool, wrap and freeze. When you’re ready to serve, let them come to room temperature and cover with aluminum foil and bake 5-10 minutes until just heated through. The foil will keep them from drying out when they’re reheated.

Why you’ll love them

Step 1: Melt the butter in the microwave and add milk and sugar and warm until lukewarm. sprinkle with yeast and add flour and stir to combine. You can do this in a stand mixer with a dough hook, but it’s not necessary. Let it rise until double.

PRO TIP: If you need a warm humid place for your dough to rise, try placing a glass bowl of water in the microwave and bringing it to a boil. Place the bowl of dough in the warm humid microwave.

Step 2: Once it has risen, add the baking powder, soda, salt and a little more flour and stir to combine.

Step 3: Cream butter with cinnamon and brown and white sugar.

Step 4: Divide dough in half and roll out into a 24 x 10 inch rectangle. You can make the dough as thick or thin as you prefer. Cover with half of the butter mixture.

Spread ½ cup of strawberry jam on top and roll it tightly into a long cylinder.

Step 5: Cut into 1 ½ inch slices and place in pie pans or 9 x 13 pan pan. Repeat with the other half of the dough. Let rise for 30 minutes while the oven preheats. Bake until golden brown.

Step 6: For the optional frosting, cream the butter, cream cheese, powdered sugar and vanilla and milk and spread over slightly cooled cinnamon rolls.

FOR OVERNIGHT CINNAMON ROLLS: Tightly cover the pans of rolls with plastic wrap and place in the refrigerator overnight. In the morning, let them come to room temperature before placing them in the oven, it will take about an hour.

For a variety, divide the dough into fourths and try adding cut peaches, or raisins and nuts to the dough. A fourth of the dough will make enough to fill a large pie pan.

Can you make cinnamon rolls in advance?


You can prepare the dough and refrigerate the rolls overnight and then bake them in the morning or you can bake them and freeze them for later. Just cover in foil and warm in the oven before serving.

Can you use fresh strawberries instead of jam?

Why does the recipe have baking powder and baking soda?


This decreases the amount of time the dough has to rise and gives it a great texture.


With the buttery dough and sweet strawberries, these cinnamon rolls do not need a sweet frosting. A cream cheese frosting adds a nice tangy taste to them but it is not needed.

Can you half the recipe?


If you don’t want a ton of homemade cinnamon rolls, you can easily half this recipe.

How do you keep cinnamon rolls soft?


To keep cinnamon rolls soft, when you re-heat them, cover them in foil and warm in a 350º oven for about 5-10 minutes. You can also sprinkle a little water on top before reheating.

What’s the difference between active and instant yeast?


The difference between active and instant yeast is that instant yeast does not need to be proofed so you can add it directly to the dry ingredients, while active yeast is larger and needs to dissolve before adding it. You can use the interchangeably. Active yeast may require an extra 10-15 minute rise time.

How long do strawberries last in the fridge? 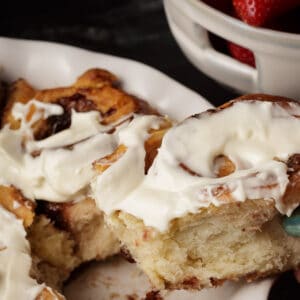 Author: Barbara Curry
Soft and rich homemade strawberry cinnamon rolls that you can make overnight are a great way to start off any weekend or holiday. Plenty of butter and strawberry jam, with a tangy cream cheese frosting.
5 from 4 votes
Print Pin
PREP: 2 hours
COOK: 15 minutes
Servings: 24