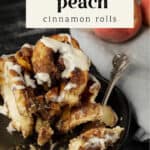 Grab some fresh peaches from the farmer’s market and create a breakfast made in heaven.

Whether you have fresh peaches overflowing on your counter or it’s the dead of winter and you only have frozen peaches, you can transform an amazing homemade cinnamon roll recipe by adding peaches. Their natural sweetness is perfect with the buttery brown sugar filling.

If you haven’t tried pairing bourbon with peaches, here’s your chance. Just add a little with the cream and powdered sugar and create a bourbon glaze that compliments the peach and pecan filling.

Since you’re adding juicy peaches it helps to have a dough that won’t fall apart. I’ve tried adding them to my basic cinnamon roll recipe and they’re still mouthwatering but adding egg to the dough gives it strength while still creating a light texture.

Normally for cinnamon rolls made from scratch, you will pour melted butter over the yeast dough and then add sugar, cinnamon and whatever filling you choose. However, if you do that with juicy peaches, you will have a big mess and the filling will just slide right off the dough while you roll it.

I’ve discovered that you can avoid this messy problem by using room temperature butter. Instead of melting it, combine the butter with brown sugar and cinnamon and then spread it on the dough. Any filling will stick to the butter mixture and it will stay in place while rolling up the dough.

With this little trick, not only does your filling stay put, but you don’t loose any of the butter, which is the best part of a homemade cinnamon roll. Butter is why the best cinnamon rolls are made at home.

PRO TIP: Use a serrated knife to cut the cinnamon roll dough, this will keep the dough from squeezing together and give you prettier shaped rolls.

How to make homemade cinnamon rolls

Step 1: Melt ⅓ cup of the butter in a microwave safe bowl and then add milk and sugar and heat until the sugar is melted. It needs to be lukewarm, so if it got too hot, put it in the fridge until it is lukewarm, otherwise, you’ll kill the yeast.

Step 2: Use a stand mixer and combine the milk mixture with flour and yeast. Once it’s incorporated add eggs and mix for about 6 minutes until you have a nice smooth, slightly sticky dough. Let it rise for an hour until doubled.

Step 3: Roll out the dough into a rectangle. Combine butter, brown sugar and cinnamon and spread it over the dough.

Roll it into a tight roll and cut into 12 large slices and place in a 9 x 13 baking pan. Let it rise for about an hour.

At this point you can cover and refrigerate overnight.

Step 4: Bake for 25 minutes until it is golden brown. Let it cool slightly and drizzle with bourbon glaze.

This recipe makes 12 very large cinnamon rolls. To make smaller rolls, divide the dough in two and roll it out ¼ inch thick instead of ½ inch.

If you want to freeze the entire batch, wait to frost them until you are ready to serve them. If you are just freezing what is left, they will still be fine with frosting on them, it will just melt into the rolls when you re-heat them.

I’m on the fence about whether to add frosting to cinnamon rolls. I really enjoy the buttery yeast dough with just the filling to sweeten it, so if I’m going to add a frosting it will typically be a cream cheese frosting like in my strawberry cinnamon rolls.

However, I’m making an exception with this cinnamon roll recipe because bourbon flavored powdered sugar glaze is a nice compliment to the peaches. Try it without before adding the glaze or serve it on the side.

Can you make cinnamon rolls overnight?

Yes, you can make the dough, add the filling and place the cut cinnamon rolls in the fridge overnight. The next morning, they’ll need to rise for about 30 minutes.

Can you freeze peach cinnamon rolls?

Cinnamon rolls are easy to freeze, just let them cool completely and place in an airtight container. When you are ready to eat them, let them thaw and warm them in a 350º oven for about 10 minutes.

How do you keep the yeast alive?

To make sure that your yeast is not dead, start out with yeast that is not expired. Then, make sure the milk is not too hot when added to the yeast. It should feel warm but not hot.

How do you store cinnamon rolls?

To store any left over cinnamon rolls, put them in an airtight container and leave on the counter for a day or two. Any longer and you should freeze them. Putting them in the refrigerator will dry out the dough.

What can you make with extra peaches 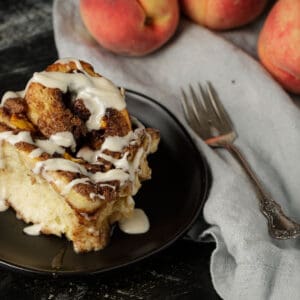 Author: Barbara Curry
There's nothing quite like the taste of homemade cinnamon rolls with a gooey brown sugar filling. Peach homemade cinnamon rolls are even better and just what you need for a lazy weekend or family gathering. A bourbon glaze makes them irresistible.
5 from 1 vote
Print Pin
PREP: 2 hours 30 minutes
COOK: 25 minutes
Servings: 12