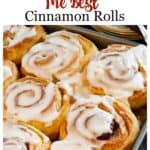 The Pioneer Woman’s Cinnamon Rolls are so light and fluffy, a decadent buttery treat. A make ahead yeast dough with no kneading required. Perfect for brunch or breakfast.

Everyone loves The Pioneer Woman and I am no exception, she seems like such a genuine person.  Everything I’ve tried from her cookbooks or website have all been great recipes. Sometimes she uses more butter or sugar than I would, but otherwise I’m a big fan.

Pioneer woman cinnamon rolls are very similar to the ones that I’ve been making for years except her technique yields a lighter and fluffier roll.  I’ve made substantial changes to her recipe but I do love her technique of adding baking powder and baking soda after the first rise. I think you’ll love my version and you can easily cut it in half but really, just freeze the extras, they are just as good.

What to fill Pioneer Woman’s Cinnamon Rolls with:

Always start with a layer of butter, you can be as generous as your dough will allow, just pour the melted, slightly cooled, butter over the rolled out dough. The butter will not only make them taste fabulous, but it helps hold the sugar and fillings in place. I like to add a mixture of brown and white sugar. I normally don’t measure but just cover the butter with the two sugars and then add a generous amount of cinnamon to the top.

If you are a nut and raisin lover, then add a handful of these to the mixture and press them into the dough a bit so they don’t ooze out while you’re rolling. Now you are ready to roll the dough into a tight roll.

Try these additions to the filling when a plain cinnamon roll is not enough:

Believe it or not, dental floss will help you get a nice smooth cut.  This won’t work as well if you have added nuts or raisins. I normally use a serrated knife.

Truly, these are so soft and fluffy, nothing like the dried out ones you see in so many bakeries.  I generally make them in 10 inch pie pans, and freeze the extras, but they will work in any container with sides.  Frozen are just as good as fresh.

Can you refrigerate the yeast dough for cinnamon rolls

Most yeast doughs can be refrigerated after the first rise. These are no exception. After you have made them into rolls, just cover them tightly with plastic wrap so that no air can get in and refrigerate overnight. They will rise some in the refrigerator. Remove them and let them double in size before baking.

Can you freeze cinnamon rolls

After the cinnamon rolls have cooled, wrap them in plastic wrap and place them in a ziplock and then freeze.  When you are ready to eat them, let them thaw and reheat in the oven at 250º for about about fifteen minutes. You can hardly tell the difference between freshly baked and frozen cinnamon rolls as long as you keep them air tight in the freezer.

I say no, just eat them with some added butter on top, the dough is too good to cover up with frosting. However, I realize I’m in the minority and everyone else loves frosting. This frosting just has the basics, butter, milk, powdered sugar and vanilla.  But try leaving a few without frosting and give them a try, you might find you’re like me and enjoy the buttery rich goodness of a perfect cinnamon roll.

Preparing these this week was bittersweet as Natalie wanted to take something in for her last advising breakfast of high school.  Throughout the year they rotate who will bring something in and normally I don’t even know when it’s her turn, she just stops and gets bagels on the way to school.  But when she mentioned it, I wanted to send something special.  We were home on a snow day so we got to sample them before she took them the following day.   I don’t think these would survive a care package to college, but I could make a batch and bring them for parent’s weekend.

All would be good on a lazy weekend morning or for brunch.  We always have a batch while opening presents on Christmas Morning.

Cinnamon rolls are so sweet that it’s nice to pair them with a savory breakfast recipe.

Cinnamon rolls like any bread recipe will dry out in the refrigerator. You can store them on the counter in an airtight container for a couple of days. After that, store them in the freezer.

How do you reheat frozen cinnamon rolls?

Let frozen cinnamon rolls thaw before trying to reheat them. Once thawed, wrap in aluminum foil and heat in the oven at 350º for about 5-8 minutes. Don’t reheat in the microwave, the dough will get rubbery.

What is the best flour to use for cinnamon rolls?

All purpose flour is the best flour to use for cinnamon rolls. It has just enough protein to allow the gluten to form but not so much protein that it will be tough or chewy like you could see if you use bread flour.

Should I use bread flour or all purpose for cinnamon rolls?

You should use all purpose flour as bread flour has more protein which can cause the dough to be tough.

Why are my cinnamon rolls not fluffy?

If you find that your cinnamon rolls are not fluffy, it could be that they did not have enough time to rise. Make sure you are placing the dough in a warm and humid place to rise.

What is the glaze on cinnamon rolls made of?

Typically the glaze on cinnamon rolls is made with powdered sugar and milk and a little butter. You can also make a cream cheese frosting which is a little thicker and has the tang from cream cheese. You can’t go wrong with either.

Why are my cinnamon rolls tough?

If you have tough cinnamon rolls it is probably due to too much protein in the flour you used. Try using an all purpose flour that has 9-12% protein.

Do you roll cinnamon rolls long or short side?

To roll the cinnamon rolls, form the dough into a rectangle and start rolling on the long side. If you roll them from the short side, they will be too thick and the outside will overcook before the inside is done.

Adapted from The Pioneer Woman Cooks 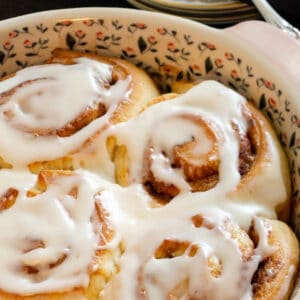 If you make my version of The Pioneer Woman’s Cinnamon Rolls, be sure to leave a comment and/or give this recipe a rating! Above all, I love to hear from you guys and always do my best to respond to each and every comment. And of course, if you do make this recipe, don’t forget to also tag me on Instagram! I would love to see your creation.