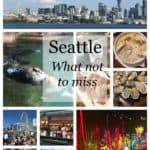 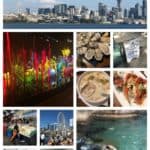 The best Dungeness crab, oysters, and some must see spots you won’t want to miss on your next visit to Seattle. So with only two days in Seattle what should you do. 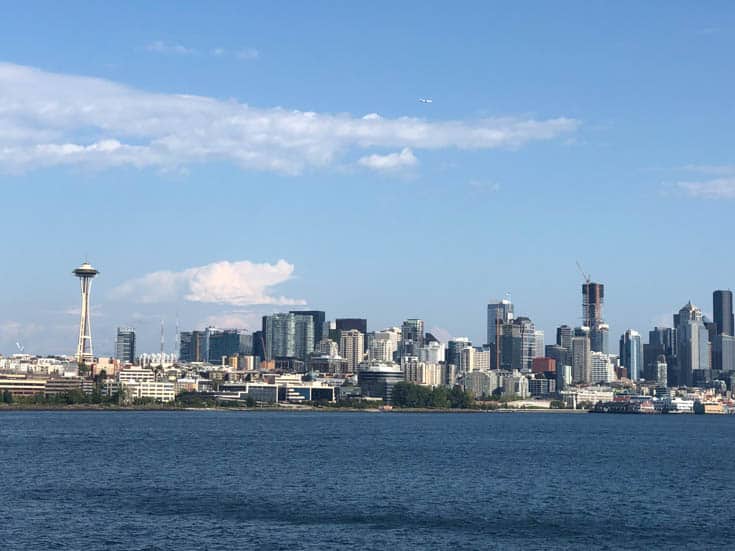 I’m a newbie to Seattle, I’ve been a couple of times but it’s been a long time ago, so last weekend, Mike and I had two days in Seattle to explore and get away from the heat and humidity of the Carolinas. I think of Seattle as a big city, but after spending time in NY and DC, it feels small and much less hectic. Although traffic was typical of a big city. The streets are wider and everything is so clean, not to mention how green everything is.  The people are super friendly and while it was not peak tourist season, it was pretty close. The crowds even in the touristy spots were not overwhelming. So here are some suggestions if you only  have two days in Seattle.

Where should you stay for a weekend in Seattle

We chose a hotel close to Pike’s Place Market so that we could walk to at least one area.  We always stay in Hilton hotels in DC and NY so we chose a Hilton property here, The Charter House. The location was perfect, just one block from Pike’s Place Market. It has a very contemporary modern feel with great views from their rooftop bar, The Fog Room. While we were lucky to have clear skies, my guess is that was unusual, thus the name. You don’t have to be staying at the hotel to hang out in this rooftop bar.

What should you see with just two days in Seattle

With only 2 days in Seattle, we decided to get a City Pass since we knew we wanted to do at least three things that were covered by the City Pass. At $99 (2019) if you do at least 3 of the 5 included places, then it’s worth the money. We also got a discount at the gift shop at the aquarium. We love museums, but we only had time for one and it was a great choice. 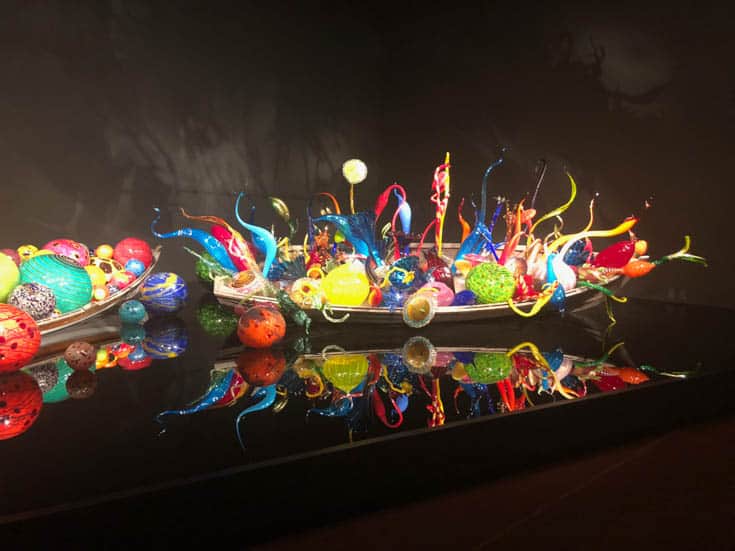 You don’t have to love museums or art to love this place.  I had seen some of his smaller pieces in NC, but had no idea what to expect from this local artist. He is very well known for his work with glass, it’s like nothing I’ve ever seen. I took a ton of photos with my phone knowing that Taylor is a huge fan of his but they don’t come close to showing his amazing talent. The colors and shapes he has formed are brilliant. 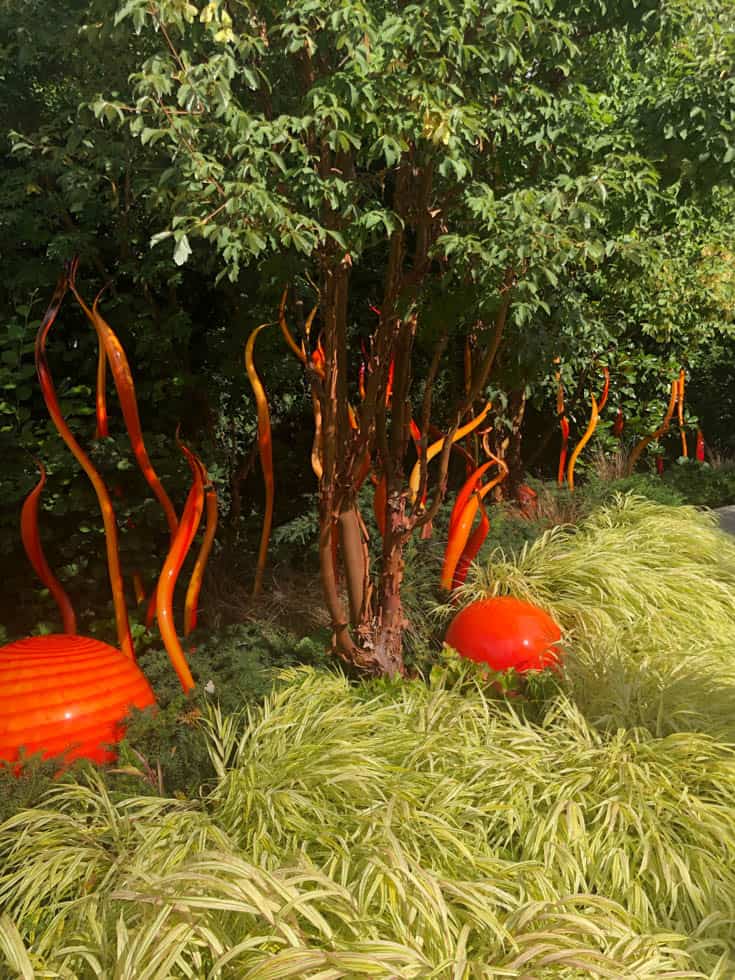 After walking through the museum, it keeps going into the garden where the art is arranged with plants and flowers in a stunning garden. Truly amazing and something you should put at the top of your list when visiting Seattle. 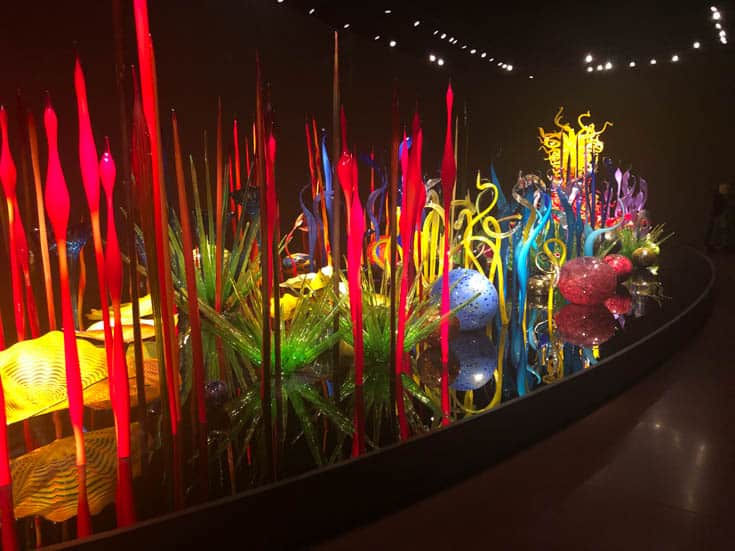 Right next to Chihuly Garden and Glass is the Space Needle. It is an icon of Seattle, built in the early 60’s for the World’s Fair. I really don’t like heights but Mike wanted to go, so I just tried not to look down. The outside platform is all glass and has benches that others, not me, can sit on and lean back onto the glass making it look like you are leaning out into nothing. The views of the city and harbor are worth the visit.  It also has a revolving floor with a glass bottom, again not great if you don’t like heights, but pretty cool for those who don’t mind. 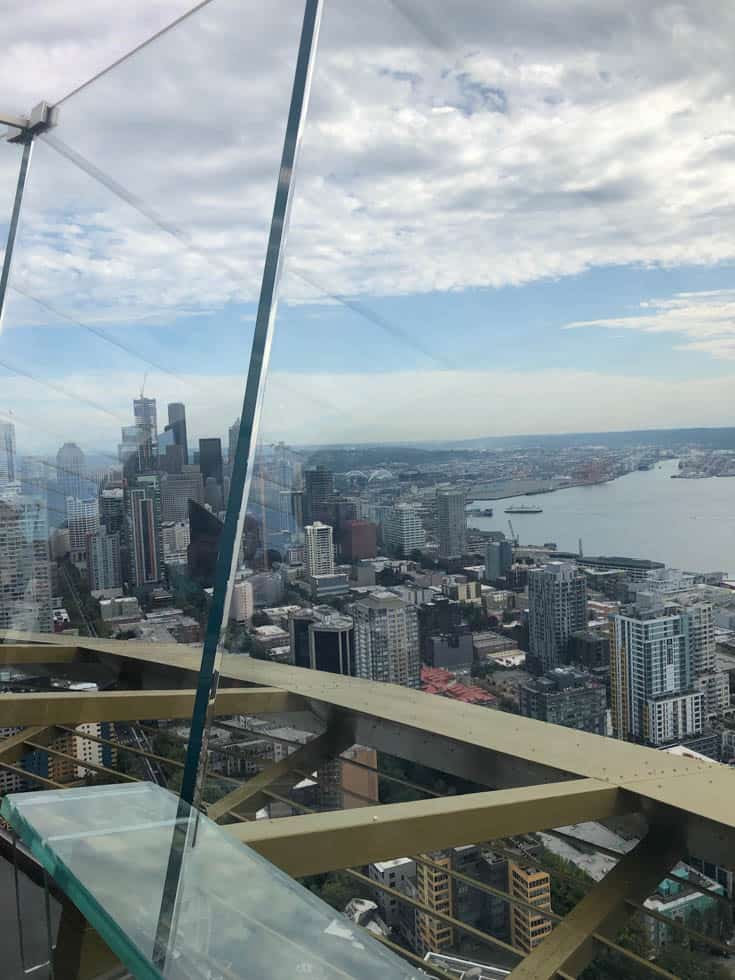 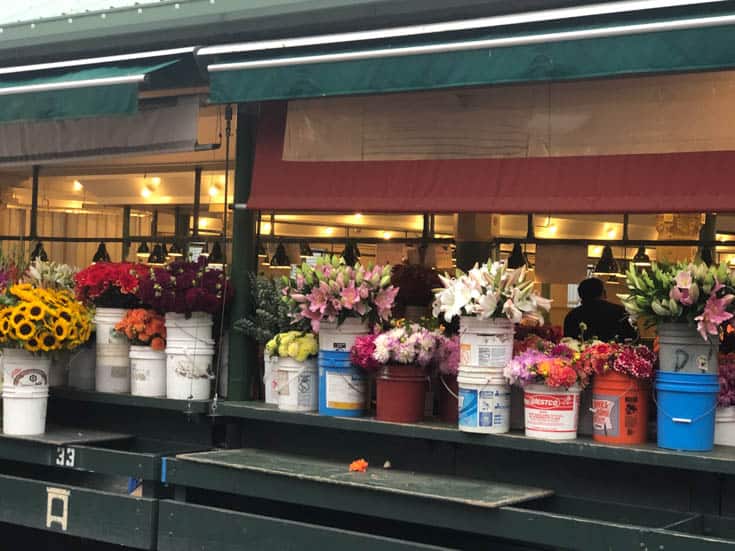 You can’t spend a weekend in Seattle without stopping by to see the fish being sold. It’s always fun and hasn’t changed in years. I love seeing all the fresh fruit and vegetable markets along the way.  Of course the seafood is amazing and they will ship anywhere or make a cooler for you to take home. I ran through the area early Saturday morning and it was fun watching all the flower and vegetable vendors setting up. This market has been here since the early 1900’s when the gold rush was taking place. The locals did not want to pay the exorbitant prices that were being charged so the farmers brought in produce to sell and they have been here ever since. 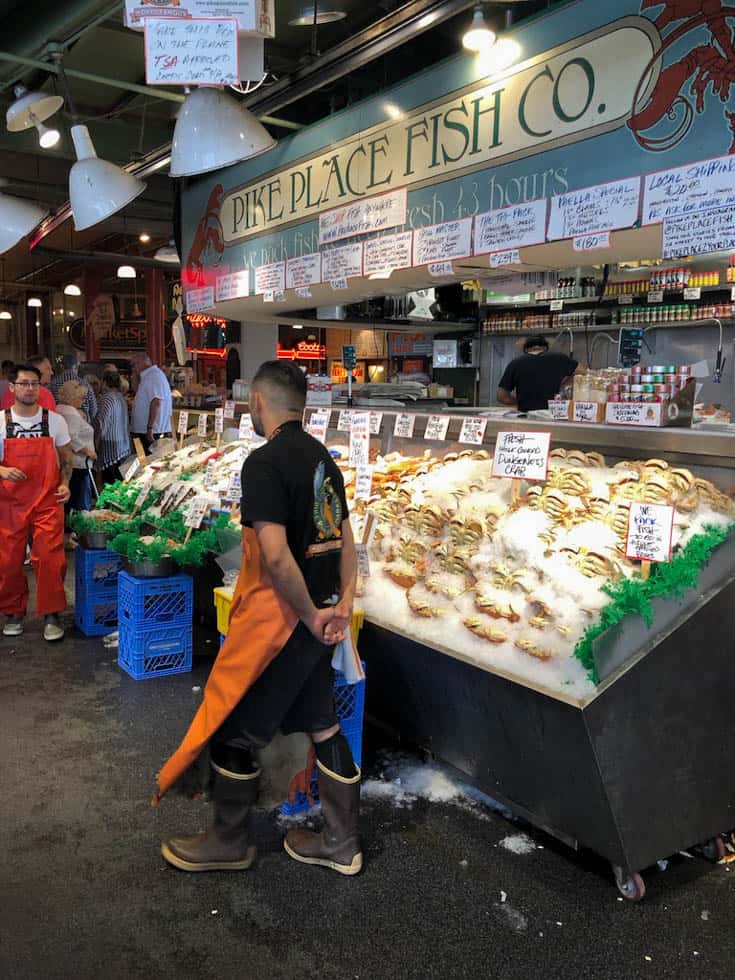 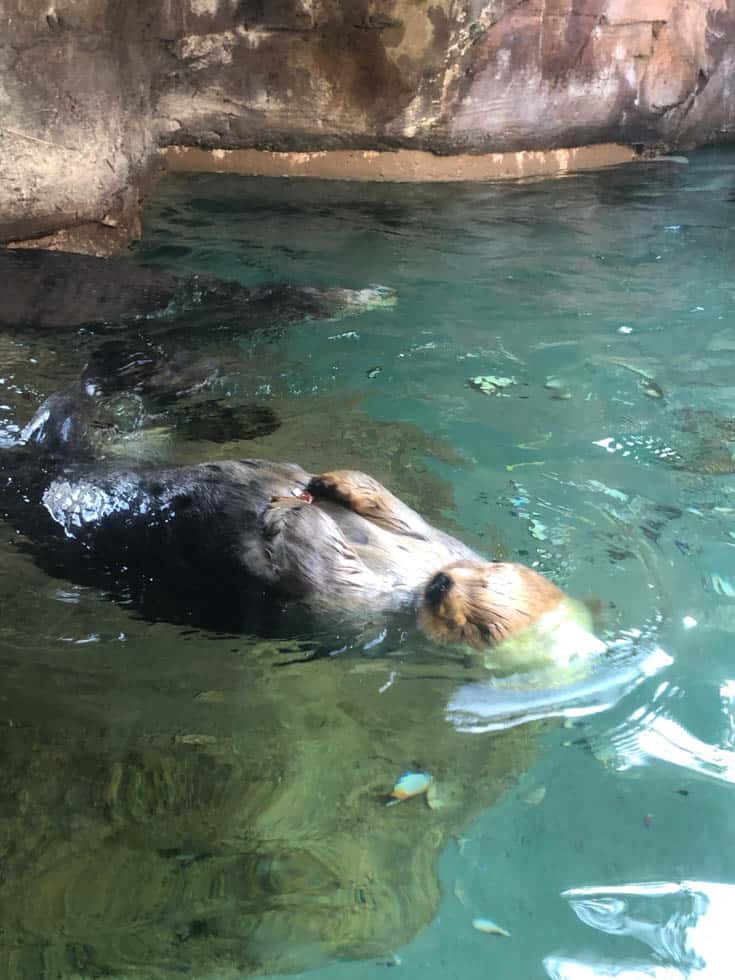 With an hour to spare before a harbor cruise we had scheduled, we decided to give the aquarium a try. It was included in our City Pass so we didn’t think we had anything to loose. While not huge, they had a lot of interesting things, all which could be found in the area surrounding Seattle. The stars of the aquarium for me were a large octopus, the sea lions, and the otters. They were playing around and so much fun to watch. Seattle is lucky to have such a fun and interactive aquarium. It’s just a block down from Pier 55 where the harbor cruises leave from. While this isn’t something you have to see if you only have two days in Seattle, it’s a great way to relax indoors and is convenient to lots of other things. 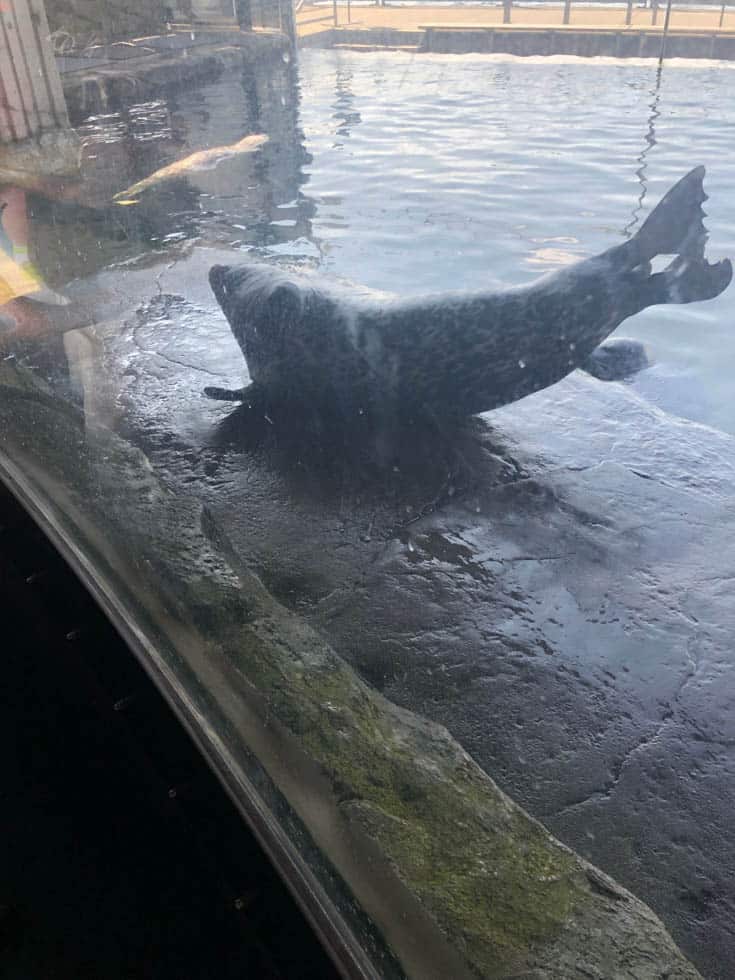 Mike really wanted to take a harbor cruise, I thought it would be lame and we were going to be on several ferries over the next few days, but since it was included in our City Pass we decided to give it a try. I have to say, it was really fun. It’s just an hour cruise and you go up the coast of the city and get some great views and then circle down around the business side of the harbor where you can see them loading the huge shipping vessels. The guide was very interesting and we learned all kinds of trivia, like Starbucks was named for a character in Moby Dick. It was a nice relaxing way to finish out our afternoon. 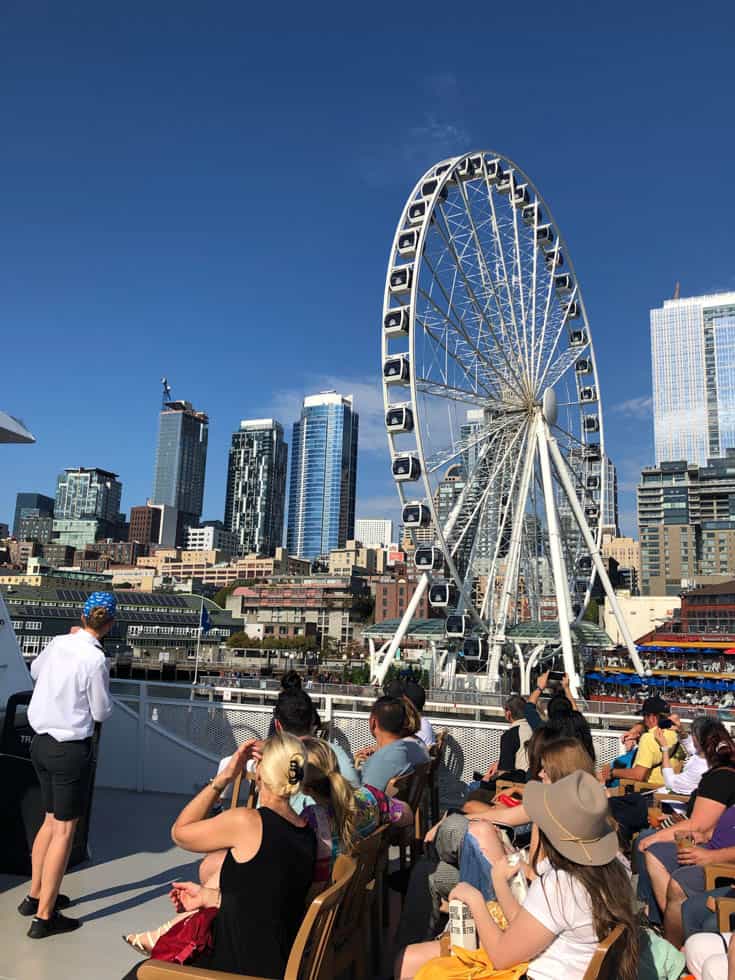 Hop on Hop off tour:

This was a really great way to see a lot of the city that you might otherwise not be able to see. We didn’t actually get off, just rode it all the way around, it took about 11/2 hours. This is a good idea if you have a pretty day, it wouldn’t be much fun if it was rainy. It did give us a good sense of where all the different ares of the city were.

There are lots of things we wanted to see, like the Troll under the underpass in Fremont, the Olympic Sculpture Park, the Museum of Pop Culture, the Seattle Art Museum and of course there are the Seahawks, Sounders and Mariners if you’re a sports fan.  We also didn’t have time to explore Pioneer Square so we have lots to come back to see.

Where to EAT in Seattle

We decided that we would just play it by ear for food over the weekend with our mission to try local seafood. We wanted to find a non touristy restaurant where the locals go. We hit the jackpot with Taylor’s Shellfish. 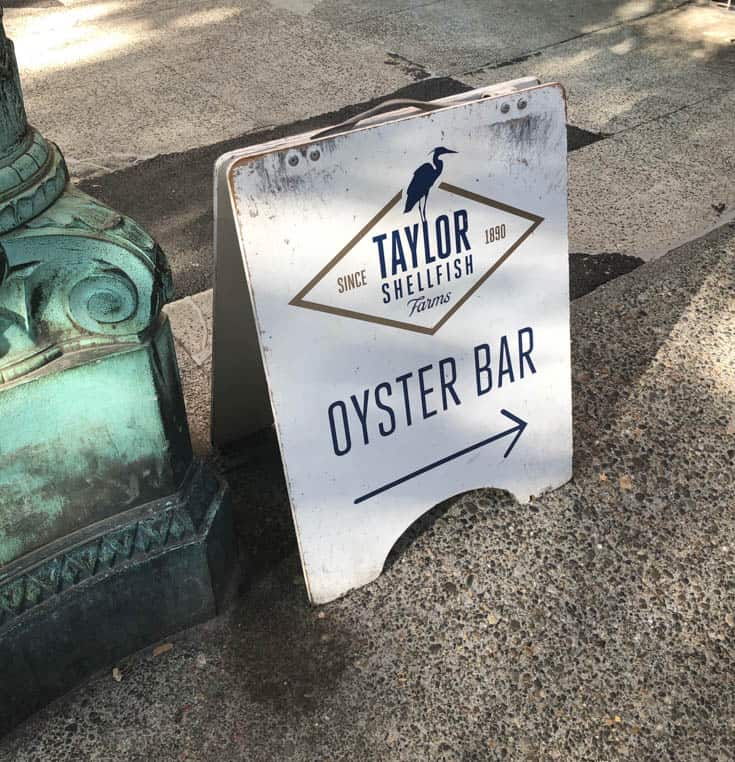 We gave this little gem a try and it was one of those restaurants that I wanted to come back to and try everything else on the menu. We chose it because it was supposed to be great for both Dungeness crab and raw oysters.  I can eat my weight in crab so I was ready. I do not like raw oysters, but Mike loves them so this seemed like the perfect place for us, plus our oldest daughter is “Taylor” so it had good karma to start with. We were starving because our stomachs were still on NC time so it was pretty early when we went but it filled up quickly with what appeared to be locals catching the first football game of the season on a couple of screens they had at the bar. 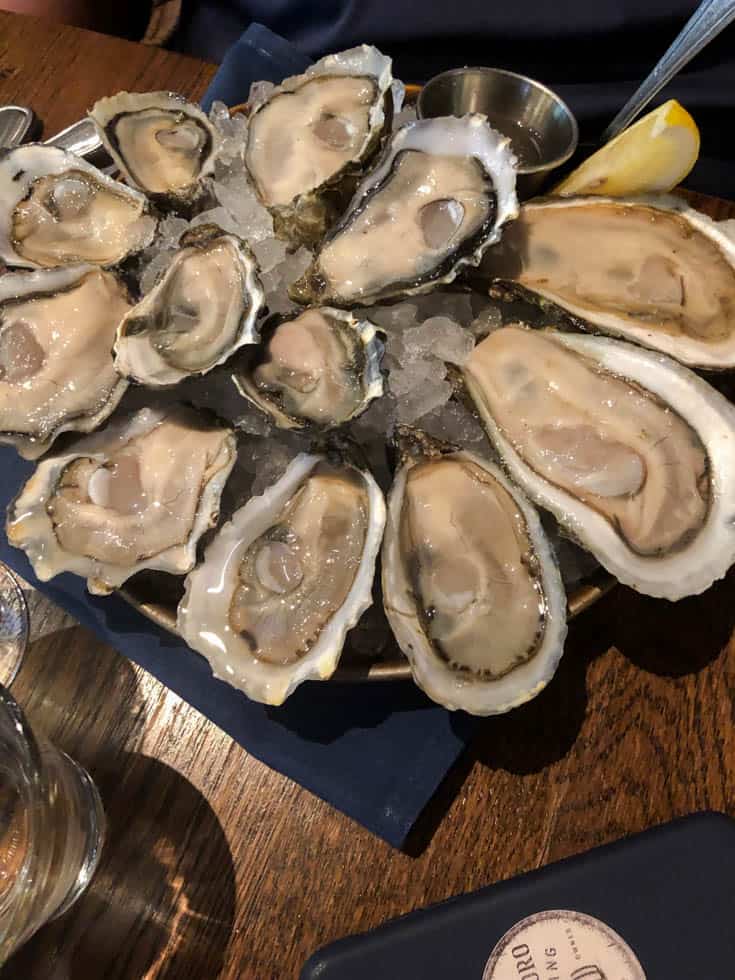 The waitress was so knowledgeable explaining to Mike the 6 different types of oysters he had and what to expect from each variety.  When I asked about the crab, she explained that it was served cold because that allowed the fat to stay in the crab meat instead of draining out. They used the crab fat, which I didn’t even know was a thing, to make a sauce using Thai chili. It was served in the shell of the crab itself. 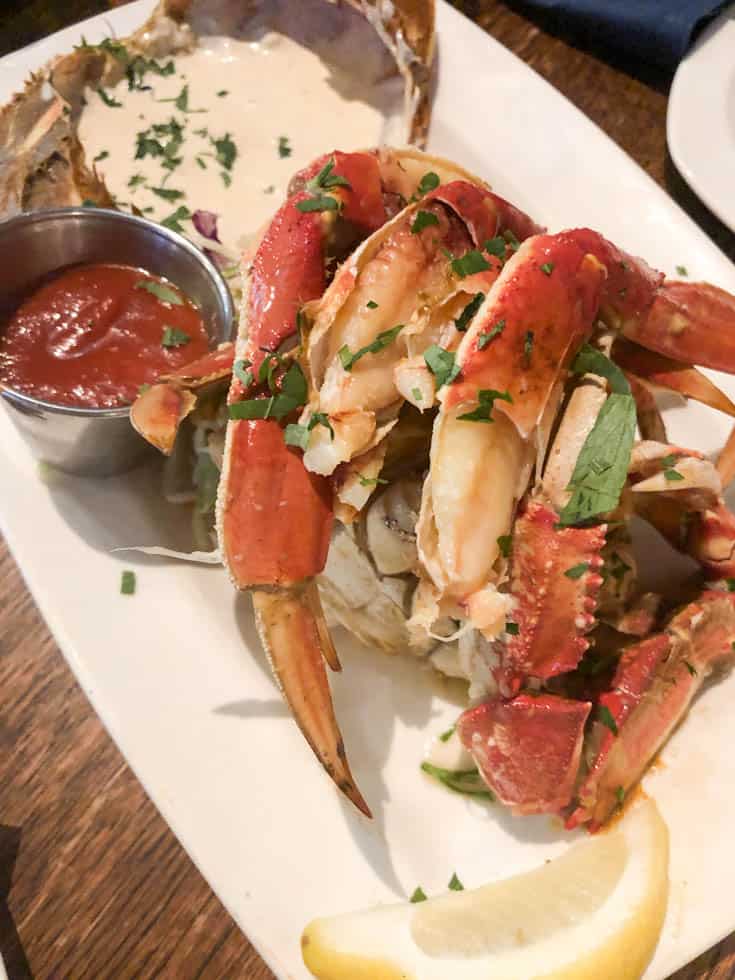 This sauce was amazing with the crab, so good that you didn’t need butter. We dipped our bread in it to get every last drop. Of course the crab was perfectly cooked and all the claws were cracked.  She brought me a warm towel to clean up with because I wasn’t leaving a morsel of crab in any of the claws. YUM YUM YUM, I love the Pacific Northwest. Oh, and Mike said the oysters were some of the best he has ever had, and we get pretty good oysters in the Carolinas. The shells were all different and our waitress had a whole conversation with him about them, but I wasn’t paying attention, just enjoying my crab. 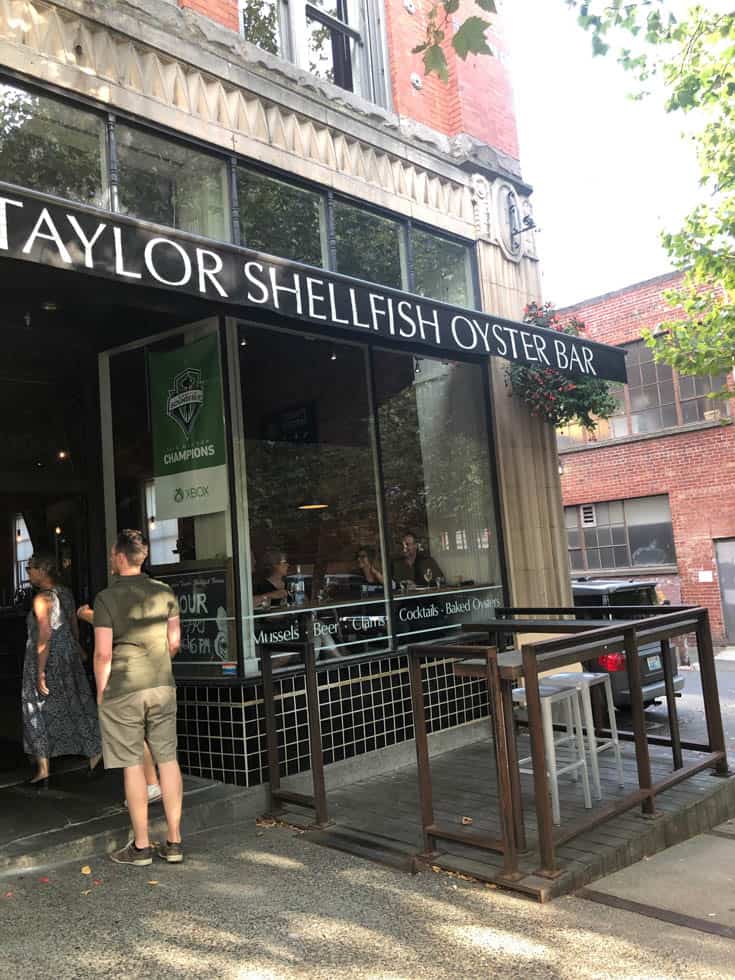 This restaurant is located in Pioneer Square which is great neighborhood to explore, I hate that we didn’t have more time to wander around. While we get great seafood at our favorite Greensboro restaurant, 1618 Seafood Grill, they don’t serve Dungeness crab so this was a real treat.

One thing we really noticed while in Seattle were the amount of homeless people sleeping on the sidewalks and in the parks. I looked into it and Seattle’s homeless crisis is worse than LA or NYC. We talked to some locals who felt that it was due to multiple reasons. Apparently the laws in Seattle are very supportive of the homeless with many benefits not available in other areas.  In addition, with the gentrification of downtown housing has become very expensive. If you are interested in learning more, here’s an article that discusses this in more detail and what Seattle is trying to do about it.  While homelessness is clearly a problem here as in most cities, I never felt unsafe, even when running in the early morning by myself.  If any city can come up with solutions to this far reaching problem, it’s Seattle.

If you are from the area or have some favorite spots in Seattle, let me know for my next trip.