I would say I’m an average runner, I finished a ½ marathon in 1:58, but I haven’t been running long. So when I read an article in Runners World about a running camp almost in my backyard, I decided to sign up. I was a little nervous about it, but it seemed like a good way to get some personalized advice.

Arriving was an adventure, as the last mile or so is on an extremely winding road. So I arrived a little carsick for our first introductory run of 3-4 miles at Moses Cone Park in Blowing Rock. This is a beautiful shady park with lots of miles of trails, however, the direction we took the first and second day included a gradual uphill for more than half of the run! I was a little intimidated by the experienced runners that were there. Two were hoping to qualify for boston in a few weeks and over half of the 20 campers had run at least one marathon.  I was not one of the faster runners by a long shot, but it didn’t really matter (well maybe my ego was bruised a little).  I wasn’t treated any differently and everyone from interns, to elite athletes, to fellow campers, were all supportive of each other regardless of where you were in your training.  There were a few repeat campers but most were first timers. 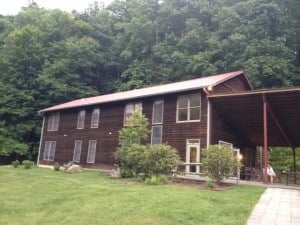 The facility reminded me a little of my college dorm, with singles and doubles sharing a bathroom with one other room.  Nothing fancy, but comfortable. I was expecting mediocre food but couldn’t have been more wrong. The chef is from Boone and fixed marvelous salads and meals for  lunch and dinner. I especially liked the peach and tomato salad that I will try to reproduce next week.  Hopefully it will turn out as good as his and I can share it.

The second day started out with a drizzle and the coldest weather we have seen in NC for many months, but it didn’t stop us, neither did the downpour that began soon after we began our 5-7 mile run.  We came back soaked but happy, and after warm showers, had a yoga stretch class which felt perfect after the hills. It proceeded to rain all day and our hike was cancelled but we got an extra lecture on cross training. Our planned lectures were on tips for running a 5K and 10k, nutrition, marathon training, what to look for in shoes, and finally, the mental side of running.  In between we signed up for a personal session with either Ryan or Pete to help with whatever you wanted help with.  I had Ryan and it was great talking to someone who didn’t try to push me to run a marathon, but gave me lots of training tips based on what I wanted to do.  I decided to hire him on a monthly basis to help improve my time for the Kiawah ½ I’m running in December.  We were also lucky enough to have two great guest olympic runners who were so interesting. 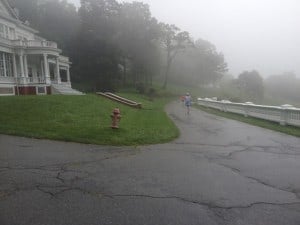 Our third day of running in the rain involved doing an 800 meter run followed by 4 400 meters with 30 seconds of rest between at a little above race pace followed by a second set a little faster. We all learned that we could run these a little faster than we had predicted.  These were immediately followed by a video taping of each of us. When we came back and dried off, we watched the videos of each other, with Ryan and Pete giving a lot of helpful tips on how to improve our form.  We learned from each others’ videos as much as from our own.

Our last day ended with a perfect equalizer.  We had to predict the time we thought it would take to run a 3.2 mile run around the camp. Apparently in years past only one person as actually guessed correctly.  I couldn’t believe it but I was in the top 10 and guessed within 30 seconds.  We were one of the best groups for predicting our times.

I learned so much in this short camp, the cost was well worth it. I am going to try to incorporate just a few things a week as we received an enormous amount of information. In addition to the above we learned some exercises to help strengthen muscles that will help our running and prevent injury and learned some good warm ups to do pre-race and after a run.  I am going to start out trying to keep my shoulders back and at 90 degree angles, vary the pace on my long run and work on doing striders after some of my runs. 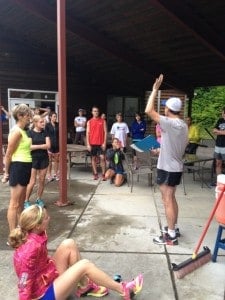 In addition to learning so much, I had the opportunity to meet some wonderful people and hear their running war stories.  As a fairly new runner, I loved hearing from those with more experience.  Plus I felt like I had gone back to college.  My roommate was from California, which is where my college roommate was from. We hit it off and I’m sure we will stay in touch. Who knows, we may find a race to run together.  We all left trying to figure out when we could come back.

Regardless of whether you are fairly new to running, or just need some ideas about how to improve your PR, I would highly recommend one of their camps.  Pete, Zika, and Ryan along with the rest of the crew pushed everyone just the right amount.