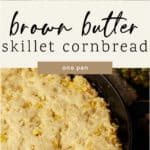 Southern cooking at its best with Brown Butter Cornbread baked in a skillet using fresh corn and sour cream. Make it sweet with something unexpected.  A guaranteed crowd pleaser and great for summer cookouts or winter chili.

I first experimented with a skillet corn bread at the beginning of the summer when I was having friends over for a cookout.  I don’t normally try out new recipes on company but Melissa Clarks’ recipes are so reliable and I was making ribs which I knew would be perfect even if the cornbread failed.

I felt certain it would at least be edible.  In fact it was fabulous!  I hate to admit how many times I’ve made this buttery cornbread  over the summer.

Cornbread with corn and brown butter has become my go-to cornbread recipe.  It has just a tablespoon of maple syrup in it but somehow, combined with the fresh corn, it’s amazingly sweet, so much so that you don’t need honey.  I hate to admit this but you really don’t even need to add extra butter it’s that good.

How to make cornbread with corn in a skillet

There are just a couple of steps when you’re making cornbread in a skillet, but that doesn’t mean it’s difficult. If you have an iron skillet, use that, if not any oven proof skillet will work.

Step 1: First you’ll slightly cook the corn in some butter in the skillet.  Remove the corn, make sure you remove all of it because you’re going to heat up the pan with some more butter and if you left any corn kernels in the pan, they will pop out of the pan and burn you. (yes I am speaking from experience here)

Step 2: Whisk an egg with sour cream and sugar.

Step 3: Whisk the dry ingredients together.

Step 4: Gently fold in the wet ingredients. Don’t over mix. Fold in the cooked corn into the batter.

Step 5: In the empty skillet cook butter until it’s golden brown, then add the batter to the pan and bake.

Sweet skillet cornbread comes out super moist but slightly crunchy on the edges. Friends and family all have loved this version of Southern cornbread.  If you have any left over, it’s great the next day or it freezes well.  And it’s perfect with a bowl of chili.

Is this cornbread dry?


There is nothing worse than dry cornbread. With butter and sour cream, this is a moist cornbread.

What if you don’t have fresh corn?


Frozen corn will work, just let it thaw before adding to the skillet.

What to serve with Brown Butter Cornbread

This is the third recipe I’ve tried from In the Kitchen with a Good Appetite by Melissa Clark that has been absolutely fabulous. If they all turn out as good as the three I’ve made so far, I may just cook my way through it.  Even though the cookbook has no photos, it’s becoming my favorite. 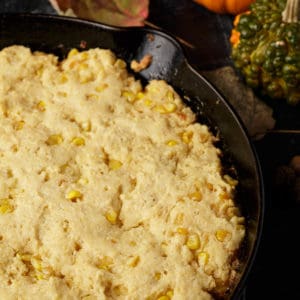 Southern cooking is at its best in this Brown Butter Cornbread cooked in a skillet using fresh corn and sour cream. Make it sweet with something unexpected.  A guaranteed crowd pleaser and great for your summer cook outs or with soup or chili.
5 from 2 votes
Print Pin
PREP: 15 minutes
COOK: 15 minutes
Servings: 10