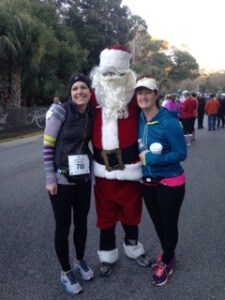 I’ve been training with Ryan from Zap Fitness since July for the Kiawah ½ marathon, first working on my base and then gradually working into speed work with the goal of improving my PR of 1:58 from the Rock n’ Roll in DC last Spring. I signed up for this race in April so that we would have a fun race to train for. My running buddies were great helping me with speed work days and I felt strong going into this race. This is only my third ½ and I still feel like a novice.

We splurged and stayed at The Sanctuary which was fabulous. If you haven’t been to Kiawah you are missing out. It’s a beautiful Island just south of Charleston with Spanish moss hanging from the trees and alligators in the marshes. There are tons of other options other than staying at this fabulous hotel, but we all thought it was worth the money if it’s in your budget. Our husbands were looking forward to playing the Ocean’s course which they did and are still raving about it.

While I didn’t execute my plan the way I wanted, I still finished with a new PR of 1:55.34. I think I could’ve done a little better had I stuck to my plan instead of running the first seven miles way too fast. My next race, I’m going to try to get a negative split if it kills me!

This was a fun race. Everyone was super friendly at the start line and throughout the race. A fellow runner gave me some much needed encouragement at the end when I was struggling. I have heard some complain in the past about the humidity but I didn’t notice it at all. It was about 35º at the start, but quickly warmed up for a beautiful sunny race. The course takes you through residential areas and through marshes on the road for the first half, and then on some of the paved bike paths when the crowds thinned out. There were 2668 runners for the ½ and another 1000 who ran the full. I really enjoyed this size over the 25,000 crowds. Water stations were plentiful and they had some great bands along the way. Santa was even there. 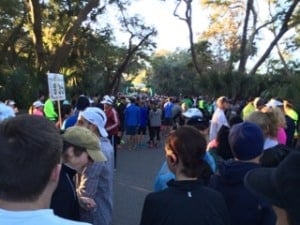 I heard that some had trouble getting onto the Island in the morning because of traffic, we saw a bus pull up just 15 minutes before the start. Other than that, packet pickup was smooth and easy and the finish was well organized with lunch and beer served starting at around 11.

The night before they provided a buffet dinner for the runners and their families. You could choose a 5, 6, or 7 time and could sign up at the packet pick up or when you registered. The food for the buffet had a good variety including my favorite, mac and cheese. They also had pasta with meat sauce, chicken and prime rib along with vegetables, salad, bread and even dessert. It was nice to be able to get a good dinner without having to spend a lot of time at a restaurant. There was a lot of energy and excitement hanging out with all the other runners. This is a Boston qualifier so there were some serious competitors here. 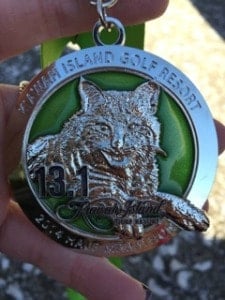 Logistically it was great staying so close to the start and finish line. It made it easy for family members not running and you didn’t have far to go to get back to a hot shower.

If you are looking for a flat ½ or full for next year, in a beautiful location, and you want a smaller but still good size race, I would suggest this one. I would definitely come back. An added bonus are the five fabulous golf courses which is a great draw for the non-runners. 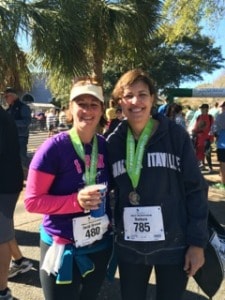