I ran the ½ marathon in Washington DC this past weekend and met my goal of completing it in under two hours.  I am still pretty excited about it. I’ve run a couple of smaller races this winter with this one in mind but hadn’t been able to train as much as I would have liked due to the awful weather we’ve had, so I was a little worried about this one.  A friend of mine and I signed up for this almost a year ago so we could have something to look forward to and train for, but also to run a fun destination race. This was her first ½ marathon so her goal was to finish.  I have been working on my speed.  Running with 25,0000 people is an amazing experience. There were people as far ahead and behind me as I could see. 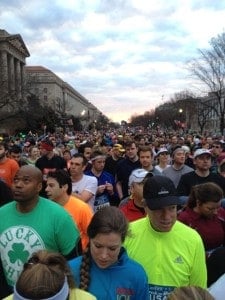 They had a delayed corral start and I was in the 15th corral but was told at the exhibition to run in the 14th where the 2 hour pacer would be.  The pacers were marathon runners from the Naval Academy and I thought it would be fun to have someone to follow.  I followed him for the 1st mile and then went a little ahead and never saw him again, it was just too crowded. Even with delayed starts for each corral, it never spread out.  I found it hard to run at my pace as there were always people to run around.

I sought out advice ahead of time from others who have run big races.  My first concern was transportation.  I wanted to be able to walk to the start as I had heard that taking the Metro would be stressful and from what others at the start said, I was right.   We chose one of the race sponsored hotels, the Metro Center Marriott which was less than a ½ mile from the start and right at a Metro stop. It was so convenient for the racers, but also the ones cheering us on who could take the Metro right to the finish line to meet us. They opened the Metro at 5 AM so I’m sure other locations would be fine, but I loved being able to just get up and walk a few blocks to get the jitters worked out.

My next concern was what to wear when the weather has been so un-predictable.  Someone suggested that I bring an old sweatshirt to keep warm while waiting that could be thrown to the side once the race started. These clothes were then picked up and given to charities.  It was 52 at the start but windy  and cold, so I was really happy I had the sweatshirt.  I also picked up some hand warmers at the expo and those kept me toasty while waiting. 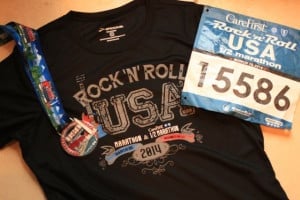 I have to say that the race was very well organized. Packet pick up was easy and you could pick up a friends’ with a signature and photo ID.  Since I haven’t run in other large races, I can’t really compare, but the start was pretty seamless.  I was expecting lively bands or music at each mile or so but that was a bit disappointing.  There were some bands but they played kind of mellow music and they were few and far between.  I was glad I had my i-pod. The water stops were plentiful but trash control was terrible. This may be true for all big races, but everyone just threw their plastic cups on the road and the road was covered when you went through.  I didn’t stop for water or a sport drink so I can’t say much about that except for the trash problem. I did notice that you had to pour your own sport drink at some stops. The end was so congested that you had to come to a complete stop after crossing the finish line where everyone was waiting for their medal.  It was so close to the finish that there was no place to go.  I ended up walking sideways back and forth as I have trouble if I come to a complete stop immediately after running a race. They had warming blankets for everyone and water and a sport drink. Further down there were pretzels, which were a great after race snack and power bars along with clementines.  After the race they had a band in the parking lot which was fun, but I was ready for a hot shower.

The only bad part was after the finish line.  They said there would be letters at the finish line to meet up with your family.  Our group agreed on a letter and the three of us who were running went to that letter. However, family and friends got off the Metro stop where there were a second set of letters prominently displayed on the fence, They could not see the letters at the finish and we didn’t know there were letters at the Metro stop.  I guess since so many people were using their cell phones, texts and phone calls could not get through so we had a very difficult time finding each other.  Since we were sweaty and it was still cold out, I was miserable waiting for my friends and not having anything warm to put on as my family had my gear bag. We thought our family had gotten stuck on the metro.  Finally someone figured out the multiple letters and we found each other.

With that said, I thought it was a great race.  We ran down the Mall, around the Lincoln Memorial and then across the Arlington Bridge.  From there we ran through Rock Creek Park and ran for quite a while down Capitol Street with the Capitol in the distance. It was fun running through neighborhoods with everyone cheering us on.  The hill after mile 6 is not something to be ignored. If you can’t train on hills, this is going to kill you.  It is very steep and long, and I run hills all the time.  However, after you’ve made it over the top, the rest of the hills are nothing.  The downhills are plentiful and not steep, so you could gain a little of the time you lost on the killer hill.  If you are trying for a time, you will need to factor this in.  It added about 30 seconds to my time for that mile.

I tried to follow race tips and drank a lot the day before and didn’t deviate from my normal eating habits except to eat a lot more carbs than I normally do.  I stayed away from alcohol and rich desserts and then just tried to get a good nights sleep. I got up 2 hrs before race time and had a nut and dried fruit mixture.  I still got a stomach cramp at about mile 10 so I need to work on my pre-race food before the next race.  It’s a hard balance finding something that can keep your energy up but not sit in your stomach.  I had a gel at mile 7 after the hill and that always helps. My current favorite is Salted Caramel by GU. I did walk every 2 miles for about 30 seconds.  This is the first race where I have tried walking and I think it helped.

We are looking for another fun ½ marathon within driving distance of NC. The only other ½ that I’ve run was the Diva ½ at Myrtle Beach about 2 years ago.  It was all women which could explain for the fun energy that I didn’t really see here.  Everyone at this race seemed a little more serious and focused.  Overall, if you’re trying to beat a PR, I think it’s hard to do in this race because of the number of people.  Washington DC is a great place for a destination race as there is so much to do and some great restaurants. More on that later in the week.