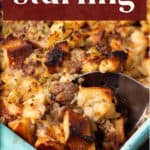 It’s not Thanksgiving without a good homemade stuffing recipe! Whether you make it inside the bird or out, it’s a classic. Add some Italian sausage, celery, onions and sourdough bread for what will be sure to become your new go-to side dish.

I always believed that the only way to make true Thanksgiving stuffing was to actually stuff it inside a turkey. If it didn’t cook in all the yummy turkey juice then it wasn’t the real deal. All other stuffings or dressings I had tried were dry and didn’t have much flavor.

However, I’ve had a change of heart and this is now my favorite stuffing recipe. Both the texture and flavor comibne in what I consider to be the BEST Thanksgiving stuffing.

I’ve lived most of my life in the South but my parents are not from the South. We ate “stuffing” growing up which consisted of bread, celery, onion, butter and egg along with some seasonings which then you stuffed inside a turkey. Anything that wasn’t inside the turkey was “dressing” and something other people ate.  So this recipe is actually “dressing” and not “stuffing”, according to how I grew up.

However, I’ve learned that what you call this side dish depends more on where you are from then whether it’s cooked inside or outside the turkey.  Southerner’s call it “dressing” where the rest of the country, me included, call it “stuffing”.

How to make the Best Sausage Stuffing Recipe Ever

Cook the Italian sausage and when browned add it to the bread.

In the same skillet, sauté onions, celery and sage and add to the bread mixture. Add some white wine to the skillet and cook down and then add butter until melted. Pour over your bread mixture.

Whisk together eggs and chicken stock and pour that over the bread mixture. Season and transfer to a large baking dish and top with butter.

Bake for 30 minutes covered at 350º, then increase the temperature to 450º and remove the cover so that the top can get golden and crisp

Pro tip: If you forget to use day old bread and your loaf is fresh, cut it into cubes and place in the oven at 250º for a few minutes.

I hope this side makes your Thanksgiving feast even more special.

How to serve Stuffing with Sausage

Stuffing with sausage is best served hot right out of the oven. It is also one of those side dishes that will retain its flavor and texture when it’s warm.

Storing this Stuffing with Sausage Recipe

Once it has cooled, this stuffing with sausage recipe should be stored in an airtight container in the refrigerator. To reheat the stuffing, place it in the oven at 350º until it is warm and the top is crisp.

Can you prepare uncooked stuffing ahead of time and refrigerate or freeze it?

Unlike the stuffing that goes inside the turkey, you can prepare the uncooked stuffing ahead of time and refrigerate until you are ready to bake it. You can not freeze this before it has been baked, the texture will not be the same and the filling will separate.

Can you freeze sausage stuffing?

Stuffing freezes great.  Just let it thaw and then reheat in the oven, the top will even stay crispy after it’s been frozen.  You can serve it with Lemon Garlic Chicken, or if you are crunched for time, have some with a rotisserie chicken.

What’s the best bread for stuffing?

I like to use sourdough bread for that distinct flavor but if that’s not your favorite, then go with a French loaf from the bakery section.  Regular sandwich bread will get a little mushy. I generally cut it into cubes and let it sit out all day. Dried bread will absorb more of the liquid and flavor.

Is stuffing better with or without eggs?

Eggs help bind the ingredients together in stuffing. If you don’t use eggs, you should use another binding ingredient.

What can you do with stuffing leftovers?

You can freeze the leftovers and re-heat in the oven. It’s great with any chicken dish if you run out of turkey.

How wet should stuffing be before baking?

The stuffing needs to have enough moisture to hold the bread together. If you add too much liquid, it can be mushy depending on how dry your bread is.

Do you bake stuffing covered or uncovered?

Stuffing with sausage needs to cook for an hour but that will make the top too brown, so cover it for the first half and then uncover for the last half.

Do you use broth or stock for stuffing?

You can use either chicken broth or stock for this sausage stuffing. Most of the flavor is coming from the sausage and onions and celery. You could even you vegetable broth if you wanted.

What is traditional stuffing made of?

Traditional stuffing is made of bread, onions, celery, eggs and butter. 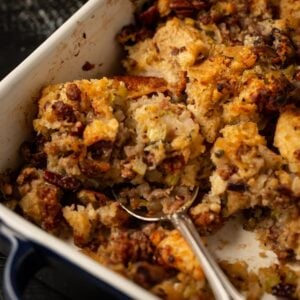 Author: Barbara Curry
It’s not Thanksgiving without a good homemade stuffing recipe! Whether you make it inside the bird or out, it’s a classic. Add some Italian sausage, celery, onions and sourdough bread for what will be sure to become your new go-to side dish.
3.86 from 14 votes
Print Pin
PREP: 30 minutes
COOK: 1 hour
Servings: 16