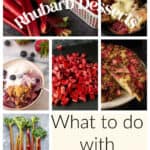 Rhubarb adds an amazing flavor to desserts and jams, but when is rhubarb in season and where can you find it?

There is nothing quite like the flavor that rhubarb adds, whether you’re combining it with strawberries in Jam, or making my favorite bread pudding. If you’re lucky enough to live in the Northern states or Canada, rhubarb will grow easily and produce beautiful stalks in the early Spring from April through June or July.

If you live in the South, finding rhubarb for your favorite recipes can be a challenge. Rhubarb can not tolerate temperatures greater than 75º so it will not come back every year like it will in the colder climates. (Check out the Farmers’ Almanac if you’re interested in planting your own)

If you can’t find rhubarb locally, most markets will sell it when it’s in season in the Spring and early summer.

Rhubarb is know for its beautiful red stems and green leaves. However the leaves are poisonous, so make sure to discard them before using it in any dish. It’s known as the pie plant since it is actually a vegetable but has been classified as a fruit.

While the leaves are poisonous the stalks are rich in nutrients, like vitamin K, potassium and vitamin C. It is also high in fiber and antioxidants including anthocyanins.(check out this article for more health benefits.)

There are two types of rhubarb and they have a slightly different growing season, but you still will not find fresh rhubarb year round. Some of the rhubarb stalks will be green and some red depending on the variety. The green are actually a little sweeter than the red.

Rhubarb that grows in the field has a growing season from April through June or July. The stalks will be a dark red and larger than celery. The majority is grown in Northern cooler climates especially, Oregon, Washington, Michigan and Canada.

Rhubarb season for hot house plants are from January through June. The plants will be lighter red to pink and the stalks will be more slender than what you see growing in the fields.

Where and How to buy rhubarb

When choosing rhubarb in the grocery or farmers market, look for firm and not limp stalks with shiny skins. The color does not matter, different varieties may be green or red, it is not an indication of whether it is ripe or not.

If rhubarb is out of season or not available where you live, you can buy frozen rhubarb although it can be a challenge to find it. The only place that I can find it in my area is at Sprouts market. Your best bet for enjoying rhubarb during the off season is to freeze it yourself.

How to freeze rhubarb

Rhubarb is one of those fruits that freezes well. All you need to do is wash it and cut it into 1 inch pieces. Place them on a rimmed baking sheet and freeze them. Once frozen place in a freezer bag where it will last for a year. If you have a vacuum sealer, it will last even longer.

How long does rhubarb last

Rhubarb will last a week or two in the refrigerator depending on how fresh it is. The best place to store rhubarb is in the crisper of the fridge. You can also place it in a plastic container.

Before you store it, make sure you have removed any leaves on the stalk. The leaves contain high concentrations of oxalic acid and should be avoided.

What to do with rhubarb

Rhubarb has a unique sourness so that it’s generally paired with a sweeter fruit when making pies or jam. However, it’s that sour flavor and tart taste that people love. While strawberry rhubarb pie or jam is probably the most well known way to use rhubarb, I love it when combined with raspberries in bread pudding.

It pairs well with so many fruits. Try adding it to your favorite tarts, crumbles or crisps. It’s great combined with sweet blueberries like in this blueberry crisp topped with vanilla ice cream.

If peaches are in season, slice it thin and make a beautiful peach and rhubarb galette.

The tart flavor requires some type of sweetener whether it’s honey, white sugar, or my favorite, brown sugar. When combined with brown sugar and candied ginger it makes an impressive upside down cake.

And of course there is the classic combination of rhubarb and strawberries.

Rhubarb can be combined with almost any fruit, my grandmother would combine it with apples and make apple sauce. So this Spring, grab a few stalks at the grocery store or market and try adding it to your favorite desserts.

How to tell if rhubarb is bad?

If the stalks of rhubarb are mushy, you should throw them out. Look for firm stalks with shiny skin.

Can you eat rhubarb after July?

You can eat rhubarb after July but it will be tough and not have much flavor. You’re better off using frozen rhubarb when it’s not in season.

Is rhubarb a fruit or a vegetable?

While technically a vegetable, the government classified it as a fruit to allow for lower taxes.

The leaves of the rhubarb plant contain high levels of oxalic acid which is poisonous and should be avoided.