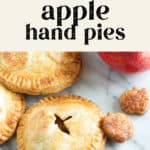 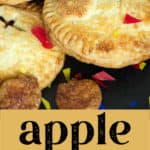 Apple hand pies made with a flaky pie crust are just what you need when you’re craving apple pie. Apple brandy is the secret ingredient that brings out the sweet flavor of the apples in these mini pies.

There’s just something appealing about apple hand pies made with a flaky pie crust and caramelized apples. Maybe it’s the size and the fact that you can eat one without a fork.

We’ve been loving raspberry hand pies this summer, but it’s time to branch out now that it’s apple season.  A fabulous Southern cook once told me to add apple brandy to my apple pie to really enhance the flavor of the apples, and boy did she know what she was talking about, just a splash ups the apple flavor when baked.

However, I never think about it adding it until I’m actually making apple pie and realize I don’t own any apple brandy. So, the last time I was at the liquor store, I bought a bottle so that I’ld be prepared.

I don’t know anything about apple brandy so I can’t say if one brand is better than another. It wasn’t very expensive.  So with a bottle in hand, I decided I would try it with apple hand pies. (It’s a lot harder to experiment with an entire pie!)

Since I love apples cooked in a skillet, I used a similar technique to caramelize the apples but with less sugar. Then I divided them into smaller pans and tried adding the apple brandy to one to see if we could really tell the difference. In a blind taste test, we all agreed that the brandy really brought out the flavor of the apples.  I tried bourbon in one of the batches but didn’t like it with apples.

I used Fuji apples, which are my favorite, but I’ve also made these with Honey Crisp and piñata apples. You want an apple that will hold its shape when cooked, a Granny Smith will also work.

Once you’ve created this amazing filling you cover it with a flaky buttery pie crust. The pie crust makes the pie but it’s hard to get the crust flaky when it’s at the bottom of a juicy fruit pie. With these mini pies, you get to enjoy twice as much buttery crust.

These are not the same as a turnover which is made with puff pastry instead of pie dough. If prefer a light and airy croissant like crust, then follow the directions for my Cherry Turnovers and just substitute the apple filling. I think of turnovers as more of a breakfast or brunch treat while hand pies are more of a dessert that you might add ice cream to.

What you you’ll need

Pantry staples that you probably have

Apple hand pies are easy to make using a basic butter pie crust, mine always seem to work better with some apple cider vinegar, but this is optional.  For a flaky pie crust use cold water and cold butter. I use a food processor for mine, but you can also use a pastry cutter. You can make the pie crust in advance and freeze it until needed. You can always use a pre-made pie crust in a pinch.

While the pie dough is chilling make the filling. In a skillet melt butter and add apple chunks and sugar. Cook until softened but not mushy and then add cinnamon, nutmeg and apple brandy. Add a little cornstarch and cook for another minute, let cool.

Roll out the dough until it’s ⅛ inch thick then cut into circles.  You can make them as big as you want, I prefer a large coffee mug that I use as a pattern for my circles, but a biscuit cutter will also work. Try cutting out apple shapes or other decorations with the leftover dough.

Place some apple filling in the center of half of the circles and brush the edges with an egg wash. Place a circle of pie dough on top and use a fork to press the two circles together. Brush the top with egg wash and cut some slits into the dough to allow the steam to escape. Top with Demerara sugar and bake.

The filling is sweet but not too sweet and the crust is flaky but still strong enough to hold it all together. This will make 8 pretty large hand pies. If you want to make them smaller put your filling on half of the circle and fold it over, crimping the edges with a fork and making a crescent shape instead of a circle.

With hand pies you can prep them in advance and bake just before serving. If you have leftovers, they freeze great and won’t get soggy!

These are delicious all by themselves. However, you could always add a little ice cream or whipped cream!

What types of apples are best for baking?

You want a crisp apple like Fujis, Honey Crisp, Piñata or Granny Smith which will all keep their shape when baked.

What does using apple brandy do to improve an apple dessert?

Apple brandy enhances the apple flavor when baked in a pie or other apple dessert.

How do you keep hand pies from leaking?

If your pie dough gets too soft then it can be hard to work with. Place it on a baking sheet and pop it in the fridge for a few minutes. The combination of egg wash and crimping with a fork should hold the filling in, but sometimes it will ooze out, not a big deal if it does. 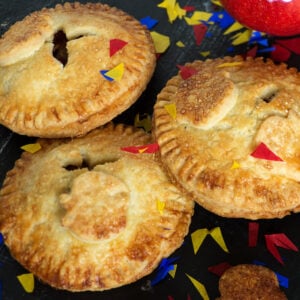 Author: Barbara Curry
Apple hand pies made with a flaky pie crust are just what you need when you're craving apple pie. Apple brandy is the secret ingredient that brings out the sweet flavor of the apples in these mini pies.
5 from 3 votes
Print Pin
PREP: 45 minutes
COOK: 25 minutes
Servings: 8