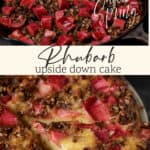 Grab some fresh rhubarb and add it to a homemade sour cream pound cake for an amazing dessert. With rhubarb upside down cake you’ll find a buttery cake with a topping of rhubarb, brown sugar and candied Ginger. Great for any Spring gathering.

My Mother-in-law and I have always loved cooking together.  It was how we got to know each other when Mike and I were first dating.  She was visiting this week and wanted to make something with rhubarb and we ended up with an amazing rhubarb upside down cake.

You normally see rhubarb combined with strawberries like in strawberry rhubarb jam, but we wanted to try something a little different. This rhubarb cake has the tartness of rhubarb sweetened with brown sugar over a buttery Southern pound cake, made in a cast iron skillet.

In the early years, while cooking togehter, we had a few fiasco’s but most were still edible.  I was sure this would be edible but wasn’t sure how the pound cake would compliment the rhubarb and if it would be sweet enough without being too sweet.  I don’t know what I was worried about because she’s a great cook and the two of us together have quite a bit of cooking experience.

For the top, our goal was to sweeten the rhubarb just enough that you could still enjoy the tartness.  For the cake we wanted a buttery pound cake that would hold the rhubarb without collapsing. She came up with the idea of using her infamous pound cake which was Aunt Millies’ recipe.  She has made this pound cake a million times and if you live in Campbellsville you may have been lucky enough to have one of hers.  We needed to adapt her recipe somewhat to work with the size and the fact that we would be pouring it into a hot skillet.

Our first attempt was perfect except for the overall presentation. I should have made sure the rhubarb was spread out evenly in the skillet before adding the batter, some of my pieces didn’t have as much rhubarb as others.

Other than that, we were pretty pleased with our rhubarb cake.  A light and buttery sour cream pound cake with a slightly sweet topping that worked it’s way into the batter so that you can enjoy the rhubarb flavor throughout the cake.

Why you’ll want to make this

Is rhubarb a fruit or vegetable

Rhubarb is technically a vegetable. It has pink or even green stalks that look like celery. The color does not determine it’s ripeness, so the green ones have just as much flavor as the pink. Tart rhubarb is commonly combined with strawberries in jam or with peaches in a galette,  or with raspberries in bread pudding.

It freezes well so if you find a bunch at your local farmer’s market or grocery depending on what area of the country you live in, chop it up and freeze it for later. It’s available only in the Spring and grows in colder climates.

For the POUND CAKE:

How do you make a rhubarb upside down cake

Step 1: Melt butter and brown sugar in a cast-iron skillet on the stove and add pecans and candied ginger. Add chopped rhubarb and cook for a couple of minutes to soften it a bit then spread it out evenly in the pan so that the top of your cake will have rhubarb on every slice.

Step 2: Cream together the butter and sugar then add sour cream and egg yolks. Add the dry ingredients. Beat the egg whites until stiff peaks form and fold them into the cake batter.

Step 3: Pour onto the rhubarb mixture in the skillet and bake for 35 minutes. Let cool for about 5 minutes and then flip it over onto a serving plate.

We topped this with whipped cream and ate it at room temperature for dessert but it’s also great for a weekend breakfast or brunch.  Everyone loved it and I especially love that we created it together.

Do you have to use a cast iron skillet?


No, you can use a layer cake pan, it may need to cook a little longer.

How do you pick the best rhubarb?


Choose stalks that are firm and crisp with shiny skins. Try to avoid limp rhubarb.

How do you freeze rhubarb?


Wash it and cut into pieces. Let freeze on a baking sheet then place in an airtight container or ziplock.

What’s the best way to flip an upside down cake?


Take the platter that you want to to use and place it over the top of the skillet. Holding it tightly with both hands, quickly turn it over. 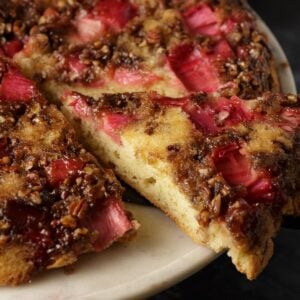 Grab some fresh rhubarb and add it to a homemade sour cream pound cake for an amazing dessert. With rhubarb upside down cake you'll find a buttery cake with a topping of rhubarb, brown sugar and candied Ginger. Great for any Spring gathering.
5 from 2 votes
Print Pin
PREP: 30 minutes
COOK: 30 minutes
Servings: 12