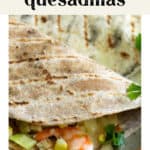 Fire up the grill for easy shrimp quesadillas stuffed with grilled corn and marinated shrimp.  Grilled corn and green onions make all the difference for this light and simple dinner.

Last month, I had a house full of guinea pigs and had a blast trying out new things on them. They were all good sports about trying out some new recipes and waiting for me to take photos!  We experimented with grilling shrimp quesadillas and it has since become a favorite.

If you don’t feel like turning on the grill, you can make these on the stove or try some mango chicken quesadillas.

Simple to make with time enough to enjoy a cocktail while the corn is cooking on the grill. Light enough for a hot summer cook out and you won’t heat up the kitchen.

Grilled corn on the cob

You’re going to love the flavor the grilled corn adds to shrimp quesadillas, but what’s the best way to grill corn on the cob. There are some who swear that cooking it in the husks is best, but I think the husks add an earthy taste to the corn.

Instead, remove the husks and silks and try putting a little butter, salt and pepper on it. Then wrap it in foil and place it on the grill. Cook it for about 30 minutes. Let it cool a bit and cut it off the cob. It has the best flavor.

If you’re in a hurry, wrap it in plastic wrap and microwave it for about 2-3 minutes. Then remove the plastic and place them on the grill.

While the corn is grilling throw the scallions on there too. It softens them and you’ll get even more of that grill flavor.

For the shrimp I use pre-cooked shrimp and add some lime and chili powder. Top it all with some spicy pepper jack cheese. If you want to use raw shrimp, just cook them in a little butter over medium heat for about three minutes until they’re pink all the way through.

Step 1: Remove the silks from the corn and rub it with butter, sprinkle with salt and wrap in foil. Grill over medium heat for about 30 minutes. Let it cool just enough to handle and remove from the cob.

Step 2: Add whole green onions to the grill while the corn is cooking, and cook until charred and softened.

Step 3: Marinate the cooked shrimp in lime zest and juice and seasonings.

Step 4: Assemble the ingredients on half of the flour tortilla. Fold it over and gently place on the grill. Cook until the cheese has melted and the tortillas are charred flipping once. Try using a fish spatula to turn these if you have one.

Got picky eaters, let them assemble theirs before placing on the grill.

If you’re in the mood for something other than burgers at your next cook-out give these a try. You can assemble everything in advance and just put them on the grill for a few minutes before serving.  Serve it with a traditional guacamole and chips or try serving it with chips and the creamiest queso.

Can you make quesadillas without a grill?


You can make quesadillas on the stove. Just place a little canola oil in a skillet over medium heat and place a folded quesadilla in the skillet. Cook for a about a minute and flip using a fish spatula. Cook for an additional minute. You won’t get the grilled flavor but you’ll still have a delicious shrimp quesadilla.

Can you use raw shrimp?


You can use raw shrimp. You will need to cook the shrimp before adding it to the quesadilla though as it won’t cook inside the tortilla. Just place a little butter or olive oil in a skillet and cook the shrimp for about 3 minutes until they are pink throughout.

Can you use frozen corn?


If you don’t have fresh corn available, you can use frozen. Just warm it in the microwave before adding to the quesadillas.

What else can you do with shrimp 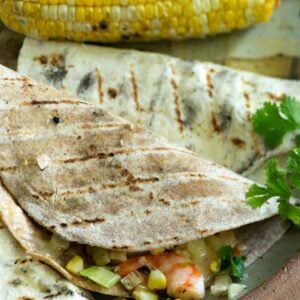