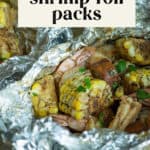 If you’re looking for a no-fuss Southern meal that you can have on the table in 30 minutes, this will be your new best friend.

While everyone loves a seafood boil, it can be a little expensive depending on where you live, and you need to be feeding a crowd, because seafood doesn’t save well. You also have to stand over a pot for 25 minutes. So while it’s one of my favorite meals, I don’t get to make it that often.

A shrimp foil pack is a great alternative where you can still get all those flavors you love but in a handy foil packet that you can put on the grill or in the oven.  You’re going to love how you can prep this in no time and then enjoy sitting outside while it cooks without heating up your kitchen.

Prep and cooking time combined are only about 30 minutes, so if you’re in a hurry and need a quick meal that everyone will be raving about, give a shrimp packet a try. If you don’t even have 30 minutes, then try oven roasted shrimp and asparagus for dinner on the table in 15 minutes start to finish.

I don’t know about you, but being able to customize dinner depending on individual likes and dislikes is a plus in my house. For this dish, you can add almost anything! Since shrimp don’t take long to cook, you’ll need to pre-cook the corn and new potatoes if you’re going to add them in.

To do this, I just place them in the microwave for a few minutes. I cooked the corn for 1 minute and it was just perfect.  I don’t think a shrimp packet needs potatoes but it’ll be a more traditional shrimp boil if you have some new potatoes. Either par boil them or microwave for a short time, until just turning soft.

For the meat, choose pre-cooked andouille sausage or kielbasa which are great flavor enhancers.  If you want to use raw sausage, you’ll need to cook it on the stove before adding to the packet.

What you’ll need for a Southern shrimp boil

How do you season shrimp grilled in foil?

Whatever you choose to put inside your foil pack, you’ll coat it with Old Bay, (my favorite), butter and garlic.  You won’t need to add salt since the Old Bay is pretty salty all by itself.  Place the packs on the grill and cook just until the shrimp are cooked.

The best part is brown butter that’s poured over the packs at the end.

Pro Tip: When making foil packets, make sure you use heavy duty aluminum foil or 2 sheets of regular duty foil so that you don’t get leaks.

Step 1: Pre cook the corn on the cob and new potatoes, if using, in the microwave. When making a shrimp boil, you don’t want the shrimp to overcook, so make sure everything but the shrimp are cooked before adding to the packet.

Step 2: Combine Old Bay with garlic, butter and lemon juice and pour it over the ingredients that are going into the packets.

Step 3: Divide ingredients among 4 pieces of foil and wrap tightly. Grill for 8 minutes on 1 side over medium heat and flip and cook an additional 5 minutes. If baking place in a 400º oven for 12-15 minutes. Check to see if shrimp are pink and cooked through. Be careful opening the packs as the steam can be very hot.

Can you reheat a foil pack?

You’ll love this recipe when you’re having friends over.   Everyone can customize their pack and you’re not stuck standing over a boiling pot on the stove.   If you’re having a crowd, consider a Seafood Boil and if you like the pack idea, try some Veggie Packs.


The best way to thaw shrimp is to allow it to thaw overnight in the refrigerator. If that’s not an option, place them in a ziplock and submerge the bag in a bowl of cool water for 45 minutes or place them directly in cool water and it will only take 10-20 minutes.

Can you add other seafood to the foil pack?


Since it all will be cooking the same amount of time, I would stick to shrimp. If you want to have a combination of seafood, you’ll need to make a traditional boil.

What’s the difference between a shrimp boil and a shrimp foil pack?


A traditional shrimp or seafood boil is made in one pot, adding one ingredient after another. A foil pack is baked or grilled inside a packet of aluminum foil.

How long does it take to cook a foil pack?


It will take about 15 minutes to bake or grill a shrimp foil packet.

What seasoning is used in a shrimp boil pack?


The traditional seasoning used for a shrimp boil is Old Bay seasoning, garlic and butter.

What can you serve with a shrimp boil pack 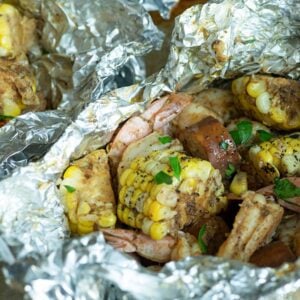