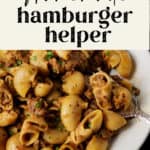 A homemade version of the classic boxed hamburger helper still made in one pot but with fresh ingredients. Cheesy pasta and ground beef come together for a weeknight comfort meal.

If you’re younger than a baby boomer, Hamburger Helper might not have been a staple in your house. For me and my friends it was on our weekly rotation growing up. It’s still around so you may have tried this boxed pasta mix where all you have to add is hamburger.

It was first introduced in 1971 as a boxed dinner that came with pasta and seasoning and you just added hamburger and water. I haven’t tried it recently but we loved it as kids.

Trust me, this recipe for homemade hamburger helper, while similar to the original, is about 100 times better. Instead of just ground beef added to pasta with dehydrated cheese, this hamburger and macaroni meal starts with onions and bacon and ends with a creamy cheese sauce with a little kick.

It’s still a one pot meal but takes a few more minutes than the boxed version. However, you’ll find that the flavor is worth the extra steps.

What you’ll need for cheesy beef and macaroni

How do you make homemade hamburger helper

Step 1: If you have time, caramelize the onions. This takes about 20 minutes but will add a depth of flavor to the dish. If you’re in a hurry, just saute the onions until soft and add garlic.

Step 2: Add bacon and ground beef to the onions and brown, cooking until the liquid has evaporated. If there’s a lot of grease in the pan, then drain it.

Step 4: Add pasta and cook until it is al dente. Reduce heat and add cheddar and American cheese, stirring until melted.

If you caramelize the onions, the entire recipe will take close to an hour start to finish. It’s one of those recipes that’s easy to follow and doesn’t require constant stirring so you can do other things while it’s cooking.

I love one pot meals like taco spaghetti or queso chicken because nobody likes to do dishes. And while this recipe is not quite as simple as those, the extra steps add so much depth. It’s also great for leftovers as the pasta has time to absorb even more of the flavors.

If you’re feeling nostalgic for the past or just want a great one pot meal the entire family will love then give this recipe a try.

What’s the best pasta to use for Hamburger Helper


Macaroni or any curved pasta works so that the sauce has something to cling to.

What type of beef works best for homemade hamburger helper


Since you are getting flavor from so many sources, I prefer lean ground beef. If using ground chuck you will need to drain the fat.

What type of cheese do you need for hamburger helper


Add a combination of cheddar and American. The cheddar for the sharp flavor and American for the creamy texture. Get the American cheese from the deli, it has a better consistency and flavor.

Adapted from the NY Times 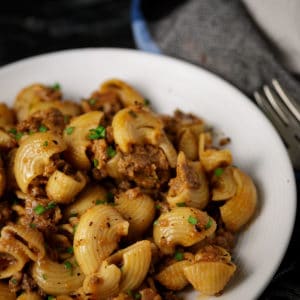 Cheeseburger hamburger helper is a homemade version of the classic boxed hamburger helper still made in one pot but with fresh ingredients. Cheesy pasta and ground beef come together for an easy weeknight comfort meal.
5 from 2 votes
Print Pin
PREP: 1 hour
COOK: 0 minutes