White Chocolate Pretzel Bark is an irresistible treat with salty pretzels covered in toffee and white chocolate. This sweet and salty dessert is much easier than you might think and great to give for a GIFT.

One of my favorite treats to give away or send to college students is chocolate caramel bark.  However, white chocolate pretzel bark is just as fantastic and can easily be shipped. I’ve made dark chocolate bark so many times and with lots of variations, using different combinations of dark and milk chocolate, adding nuts or bacon and topped with salt.  I’ve never met anyone that could resist it.

One of my biggest fans mentioned that he has to watch his caffeine, so he can’t eat dark chocolate bark late at night. So I came up with a completely different version using white chocolate which has no caffeine.

White chocolate is much sweeter than dark chocolate so to offset that sweetness, I used salty pretzels as the base. The combination of salty, caramel and white chocolate is divine and a little addictive. I keep some in the freezer and grab a bite for an afternoon pick me up.

How do you make white chocolate bark with toffee

Step 1: Start by putting pretzels onto a lined cookie sheet, they will overlap some.

Step 2: Make the toffee mixture by heating up butter and brown sugar in a saucepan. No need to stir it. The first time around, I didn’t cook the toffee quite long enough and it was a little grainy.  One way to prevent this is to use a candy thermometer and cook until it reaches 300º. Pour the toffee over the pretzels and bake.

Pro tip: Make sure there is no moisture in the saucepan when beginning the toffee.

Step 3: While the toffee and pretzels are baking, carefully heat the white chocolate in the microwave at fifty percent power and then pour it over the hot toffee pretzel layer.

Before it cools add sprinkles if you want it to look festive.

Allow the bark to cool thoroughly before breaking into pieces. You can speed this up by placing it in the freezer.

I took this to work one day, so I had multiple testers.  The first declared it “the best thing he had ever eaten” and decided he would be making it for Christmas gifts this year.  Red and green sprinkles turn this into Christmas bark! All testers were unanimous giving this a thumbs up.

My mother-in-law loves white chocolate and this is one of her favorites. While the white chocolate will get a little melty if it’s really hot, so far I haven’t had any trouble shipping it. It is great with your favorite warm beverage.

Is almond bark the same as white chocolate

Almond bark is nothing like white chocolate. It’s made of vegetable fat, flavors and colors. NOT what you want to put on this delicious toffee bark. White chocolate on the other hand is made up of cocoa butter, milk solids and sugar, they may both be white, but that’s about the only thing they have in common.

What’s the difference between caramel and toffee

There are several difference between caramel and toffee. Caramel has cream and is cooked to a lower temperature, 248º, the texture is softer and chewy. Toffee on the other hand is made with sugar and butter and is cooked to 300º. It’s typically hard which makes it perfect for bark.

What happens if your butter and brown sugar separate?


It won’t matter a bit, just pour it all over the pretzels and it will be fine once it’s baked.

Can I substitute almond bark or candy melts for white chocolate?

What if you don’t have a candy thermometer?


For chocolate bark, it’s not critical that the temperature is 300º, it’s more of a guideline. Watch the brown sugar and butter closely and once it starts to turn the color of caramel, it’s time to pour it over the pretzels.

Can you ship white chocolate bark?


As long as the temperature outside is not extremely hot, it will ship without melting. I always tell people to put it in the refrigerator or freezer once it arrives for a few minutes to firm up the white chocolate.

What happens if moisture or water is in my pan when making the chocolate?


It can cause the liquid to become grainy, it still tastes the same, but might not look as good. 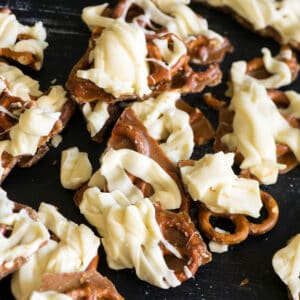 White Chocolate Pretzel Bark is an irresistible treat with salty pretzels covered in toffee and white chocolate. This sweet and salty dessert is much easier than you might think and great to give for a GIFT.
4 from 5 votes
Print Pin
PREP: 20 minutes
COOK: 10 minutes