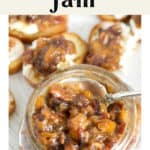 Bacon makes everything better, so why not try it with peaches. Bacon Peach Jam adds a sweet and salty flavor to a burger, sandwich or add some to goat cheese on a crostini for the best appetizer out there. Easy to make and not greasy at all.

While on my jam kick this summer, I decided that I should branch out into the savory jams.  I absolutely love the tomato jam I’ve had on burgers at restaurants but it sounded like a lot of work. However, with peaches doing so well this year, and my success with Peach Vanilla Jam, I wanted to give bacon jam a try but with peaches instead of tomatoes.

The addition of peaches adds a natural sweetness to Bacon Peach Jam so you don’t need to add as much brown sugar.  This is a recipe that you need to taste as you go along. Start with about ½ cup of brown sugar and add more if needed.  My first batch was a little too sweet for me so I added less in the second batch and it was just right. However, no one was complaining about the first batch.  I didn’t can the first batch so I shared it with several friends who are still raving about how good it is. Mike wasn’t happy when he learned I had given it all away until I told him I had made another batch and canned it so we would could have more anytime we wanted.

What can you do with Bacon Peach Jam

Bacon Peach Jam is both sweet and salty so it can go with so many things. We first tried this with goat cheese on a crostini. The sweet and salty flavor with the goat cheese was amazing!  One of my friends tried hers on a grilled cheese which will upgrade your grilled cheese sandwich to an all new level.  It’s also pretty tasty on a burger. We are still experimenting with ways to enjoy this wonderful jam.  I think it would be great on any meat to jazz things up a bit.

My jam was not greasy at all.  I would suggest bringing this to room temperature before serving. I don’t really like cold bacon so I think room temperature works great. If you want to serve it right away, you can heat the jar in the microwave for a few seconds to take the chill off.  If you’re thinking of Christmas gifts or a hostess gift, anyone would love to receive this.  Of course you will need to can it which is so simple. Check out the easy instructions in the Peach Vanilla Jam post if you haven’t canned before. I used the same technique here.  You can also use frozen peaches if it’s past peach season where you are.

Bacon makes everything better, so why not try it with peaches. Bacon Peach Jam adds a sweet and salty flavor to a burger, sandwich or add some to goat cheese on a crostini for the best appetizer out there. Easy to make and not greasy at all.
5 from 2 votes
Print Pin

Serve on crostini with goat cheese or on sandwiches or burgers.