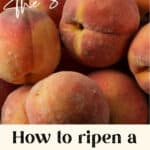 Do you hate to get home with peaches and find they’re not ripe enough to eat? Don’t worry, there are several ways you can speed up the process as long as they weren’t picked too early.

Fresh juicy summer peaches have not rival but only when they’re ripe. If you find yourself with less than ripe peaches, you can ripen a peach at home with a few tricks.

Peaches are one of those marvelous fruits that will ripen after they’ve been picked as long as they weren’t picked green. Since they bruise easily, they’re normally picked before they have fully ripened so they won’t be destroyed in shipping.

This mean that when you bring them home from the grocery or farmers market they probably won’t be ready to eat. Here are a few tips to ripen them faster when you just can’t wait for mother nature.

When are peaches in season

Most of the peaches in the US come from California where the growing season runs from April to October. But don’t discount Georgia and the Carolinas where you can find plenty of sweet juicy peaches from May through the end of July and even into August and September for some varieties.

The further North you go the later the growing season with most starting in July and going through September.

How to tell if a peach is ripe

While a peach will ripen some off the tree, the sweetest peaches are those picked at their peak. Here are some things to look for in a perfectly ripe peach.

What are the best peaches for baking

Peaches fall into two types, Freestones which are peaches that can easily be removed from the pit, and Clings where the peach is firmly attached to the pit. Freestones are the most common and what are used most in baking because they’re easier to peel and slice.

However, some Clingstone varieties are much sweeter, so it you don’t need perfect slices, then search out some Clings at the fruit stands. What you typically see in grocery are Freestone.

White peaches on the other hand have a shorter growing season but are some of the sweetest peaches you’ll find. They’re lower in acidity making them sweeter than yellow peaches. They come in both Freestone and Cling varieties.

If you have extra peaches around and don’t feel like baking they’re so light and refreshing in Sangria.

How to cut a peach

When baking with peaches you’re going to need to cut them and most of the time peel them. Some folks like to parboil their peaches to make it easier to peel. But I’ve peeled my share of peaches over the years and I can peel a lot of peaches in just the time it would take to boil water.

The problem with cutting a peeled peach is that peaches are juicy and it’s hard to cut something that is slipping around. I find the best way to cut a peach is to cut around the peach and then twist it so that it separates from the pit. Remove the pit and if you’re making peach dumplings and need peach halves you’re done.

If you need quarters like you do in a peach kuchen, then just cut the halves again.

Say you’re making a cobbler or cake and need slices. You can hold the peach half in your hand and cut it into slices, or place it on a cutting board if your knife skills are rusty.

If you have a Cling peach, cut a slice and pull it away from the pit. The first slice is the hardest to come out, after that you just cut into the pit holding the peach in your hand. This is the method I’ll use if I need chopped peaches like when I’m making a tomato and peach salad, peach salsa or peach cinnamon rolls.

If you’re just cutting a peach to eat or leaving the peeling on, then turn the peach on its side and cut it around the equator rather than from top to bottom. Then twist and it will come apart.

How do you store peaches

Once your peaches are perfectly ripened, you can store them in the refrigerator to extend their life for a few days.

If your eyes were bigger than your stomach and you have too many peaches to eat, try freezing them. To freeze peaches, peel and slice and place on a parchment lined cookie sheet and freeze in a single layer. Once frozen, place in a freezer bag or vacuum seal them.

They’ll stay fresh in the freezer for about a year if they’ve been vacuum sealed. They’ll still be ok to eat after that but might not have as much flavor.

Are peaches good for you

Peaches are a pretty healthy fruit with only 58 calories. They’re packed with vitamins, minerals and antioxidants. There is some evidence that they have anti-cancer properties and can boost immunity.

How do you keep peaches from turning brown?


When cut peaches are exposed to the air they’ll turn brown like apples and pears. To prevent this, sprinkle them with a citrus juice like lemon or orange depending on what you’e using them for.

Where are most of the peaches grown in the US?


Most of the peaches in the US are grown in California but they are also grown in Georgia, the Carolinas and Florida along with a smaller amount in some of the Northern states.

What’s the difference between a peach and a nectarine?


The only difference between a peach and a nectarine is the fuzzy skin on a peach compared to the smooth skin on a nectarine. They can be used interchangeably in recipes.


White peaches tend to be sweeter then yellow peaches because they have less acidity.

What desserts can you make with fresh peaches