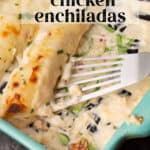 Creamy White Chicken Enchiladas are a quick and easy dinner smothered with a delicious sour cream sauce. Perfect for a family dinner that you can prepare in under 30 minutes.

It’s amazing how just a little cream and cheese can turn a so-so dish into a spectacular one. This white chicken enchiladas recipe made with rotisserie chicken and then covered in a cheesy sour cream sauce is one of our favorite ways to make enchiladas. Not your traditional chicken enchilada recipe because there’s no red enchilada sauce and while creamy, it’s nothing like beef enchiladas. That doesn’t mean they’re not packed with flavor.

White chicken enchiladas have a bit of heavy cream. You can always cut back on the fat and use whole milk but you’ll need some fat to get a creamy sauce.

I love spicy food so I used a jalapeño and serrano pepper for some heat and pepper jack cheese on top at the end to give it even more spice. This can easily be adapted by using Monterey Jack cheese and leaving out the peppers.  Your sauce will still be awesome.

You can substitute milk or half-and-half for the cream and while it won’t be quite as rich, it will still have a great flavor. You can also use low fat sour cream.
If you want it more spicy use the seeds of the peppers.
To make this mild, leave out the peppers and use a mild cheese like Montery Jack or Colby instead of Pepper Jack cheese.

How to make White Chicken Enchiladas

First, start by sautéing the onions and peppers together.  Then add rotisserie chicken with a little chicken broth and some sour cream.

Second, in a separate skillet make a béchamel sauce by combining butter, flour and chicken broth. When thickened you’ll add some cream, cheese and sour cream.

Third, assemble the tortillas and pour the sauce over the top. Add a bit more cheese and bake.

Pro tip: Both corn and flour tortillas work well in this recipe so select your favorite. Microwave the tortillas wrapped in a damp paper towel for a few seconds to make them easier to roll.

Every time I pull out this recipe, everyone is always asking why I don’t make these more often. The sauce is so good, you’ll want to lick the pan.

What to serve with White Enchiladas

Since the sauce is pretty rich, queso dip is too cheesy. Try something light and fresh like a peach salsa or add a simple salad. A side of rice is great to mop up any extra sauce.

How to store White Enchiladas

Store white enchiladas in the fridge for 3-5 days in an airtight container. You can also freeze any left over and simply reheat in the oven at 350º for 10-15 minutes.


Enchiladas are traditionally a corn filled tortilla with a filling mixture of meat, maybe some veggies or beans and cheese and are smothered with a red enchilada sauce. This version uses a flour tortilla, but will still work with corn.

What is the difference between a red enchilada sauce and a white sauce?


Red sauce in traditional enchiladas is a mix of red chiles and chili powder along with tomato paste. Fresh ingredients like onion, garlic, oregano also flavor the sauce. This white sauce begins with a basic bechamel sauce of flour and butter, then adding in broth, sour cream and heavy cream and cheese. Both sauces are delicious but are very different.

What pepper gives the sauce the most heat?


The serrano pepper is typically 2-4x hotter than a jalapeno pepper. If you love spicy foods, you’ll enjoy the combination of the peppers. If you enjoy some spice, but would prefer to pare it back, stick with a jalapeno.

Can you freeze enchiladas?


Yes, the baked enchiladas will freeze so make a a double batch so you can prepare one dish for dinner and another to freeze for another day. Just let it thaw and bake covered in aluminum foil in a 350º oven for about 10 minutes.

Can this sauce be made as a dip?


You can make this sauce into a dip, or just serve the enchiladas with some chips and scoop up any left over sauce.

Are enchiladas better with corn or flour tortillas?

Corn tortillas are traditional and add flavor, but I prefer flour tortillas that are easier to fill and roll.

What is the white cheese on enchiladas?

The white cheese typically used on Mexican enchiladas is queso blanco which is a mozzarella type of cheese that will melt unlike Cotija or Queso Fresco which will not melt.

What is white enchilada sauce made of?

The sauce used for white enchiladas is a bechamel sauce made with flour and butter with cream, sour cream and cheese added in.

Do you bake enchiladas covered or uncovered?

Enchiladas are baked uncovered to allow the top to brown.

What is the secret to good enchiladas?

A homemade sauce is the secret to good enchiladas, it makes all the difference.

What’s typically in an enchilada? 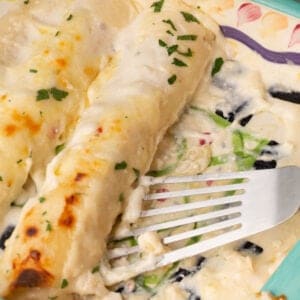 Author: Barbara Curry
Creamy White Chicken Enchiladas are a quick and easy dinner smothered with a delicious sour cream sauce. Perfect for a family dinner that you can prepare in under 30 minutes.
5 from 6 votes
Print Pin
PREP: 20 minutes
COOK: 20 minutes
Servings: 8