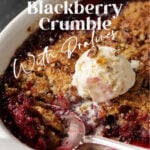 Blackberry Crumble filled with fresh blackberries and covered with a homemade praline topping is a show stopper. Just one simple step makes this dessert something special!

When you can find wonderfully sweet blackberries you have the perfect excuse to make a Blackberry Crumble. We had a friend from California visiting and I wanted to make a traditional Southern dessert.

While we can’t claim cobblers, crisps and crumbles to be completely Southern, they’re pretty popular in this area of the country. However, if you add pralines to the topping, then you can officially call this Southern.

It doesn’t actually have pralines on top because pralines are made with milk and butter along with sugar and pecans for a creamy amazing treat. However, it’s praline-like in that you slowly cook sugar until it’s golden brown and then mix in pecans.

While simple blackberries are the star of this dessert, the topping is just a bit different from a traditional crumble. A crumble is a fruit based dessert topped with a streusel like topping and baked. Add oats to the topping and you have a crisp, change it out for biscuits and you have cobbler.

When you add this praline mixture to the topping you get a sweet crunchy layer. The texture is similar to the pecan topping on my peach crumble. but the flavor is different.

I thought I would try to catch some pictures with my phone of the praline mixture but I swear it was just the perfect color and then 10 seconds later I had burned it.

If you love pralines but don’t want something quite that sweet, you might like praline graham cracker bars, all the buttery pecan taste without quite so much sugar.

If you like an oatmeal crisp topping with your blackberries, then you’ll want to to my blackberry crisp with red wine, another simple and easy dessert.

How do you make the praline topping

Add sugar and water to a saucepan and cook initially over low heat, then turn the heat up and bring to a boil, swirling until it begins to turn golden brown. Immediately remove from heat, add pecans and pour it onto parchment paper. Freeze for 10 minutes. Super simple!

Remove from the freezer and place in a resealable bag and pound into small pieces but not powder.

It took an additional 10 minutes making the pralines, but worth it if you want something a little special. You can still have a wonderful homemade blackberry crisp and just leave out the praline mixture.

Crumbles are simple and easy even if you’ve never baked from scratch.

How do you make a blackberry crumble

Cook the blackberries in a saucepan with a little sugar and vanilla to soften them. Add to a baking dish.

When you cook the berries, depending on how juicy they are, you might have a lot of juice in the pan. You can include it in the crumble but I generally leave about half of it in the pan so that the crisp is a little more formed. If you don’t mind eating it out of a bowl, include all the juices.

Add cold butter to flour and pinch the butter until it’s about pea size.

Add a little sugar and half of the praline mixture.

Place over the top of the blackberries and then sprinkle a little of the praline mixture on top.

Bake for about 25 minutes, when the fruit is bubbly and the topping is golden brown.

How to serve blackberry crumble

Great alone or with ice cream or whipped cream on the side. I think vanilla ice cream makes all cobblers, crisps or crumbles just a little better.

You can assemble this earlier in the day and bake it when you sit down for dinner. It will be piping hot once dinner is over with.

FAQs and other recipe tips

Can you use frozen berries

Frozen berries are softer than fresh so if using frozen, you won’t need to cook the blackberries.

Can you substitute a different topping

Try a more traditional topping like what I use for peach crumble or go with a biscuit like cobbler topping like with strawberry cobbler or a classic mixed berry crisp topping. That’s the nice thing about fruit desserts, you can mix and match toppings and add whatever fruit you have available.

How long will a blackberry crumble last

After a day or two the topping will get soggy from the fruit. It’s best eaten the same day but can be reheated the following day. This particular topping stays crisp longer than most.

When are blackberries in season?

Blackberries are in season from spring to fall. However, they have a peak season of July to August so be sure to be on the lookout for them!

Adapted from What Katie Ate 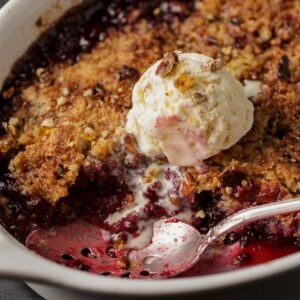