×
Jump To Recipe Print Recipe
While apples are so plentiful and pumpkin spice is all the rage, the pear is often neglected.  Since it’s so much juicier than an apple, they make an unbelievably moist muffin.  Not only are they moist, but crystalized ginger adds a slightly sweet and spicy flavor.  Since I only like raw ginger in very small doses, I was a little hesitant to use ginger in a breakfast muffin. However, the crystalized ginger is sweet and has just a hint of the ginger flavor compared to the real deal.  I threw in some pecans and they paired perfectly with the pears.  (Try saying that three times)  I added just a touch of cinnamon sugar to the top.
I was surprised at how delicious these turned out.  Every recipe I try from this wonderful blog has turned out great, you should check them out.  I used very ripe pears which I didn’t even peel.  I shared with friends who agreed with my assessment.  So branch out from apple and blueberry muffins and give the neglected pear a chance. 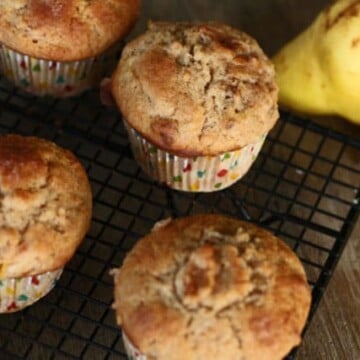