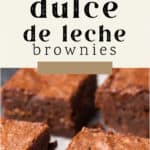 Transport yourself to Latin America with these Dulce de Leche Brownies. The basic chocolate dessert stepped its game up with this caramel-like delight. The milky, sugary goodness of dulche de leche is to die for!

I’ve discovered something new that’s so good it should get its’ own food group.  How have I missed out for so long on this amazing topping!  Dulce de leche is a caramel like sauce that is a must to have on hand to drizzle over ice cream or make into dulce de leche brownies. It’s very popular in Latin America, and actually translates into “candy of milk”.

Since discovering how rich and creamy this sauce is I’ve decided that dulce de leche desserts need to be made more often and I’ve added it to cakes, cookies and bars. You can use it anytime you would use a caramel sauce or sweetened condensed milk.

How do you make dulce de leche:

Not having any in the house, but having a can of sweetened condensed milk, I attempted to make it.  I can’t begin to tell you what a sticky mess it made in my microwave. After 30 minutes of cleaning every crevice in the microwave from where it had spilled over, I decided it was worth the money to buy a jar. I found it where the biscoff spread and peanut butter are in our grocery, or you can order it.

The color alone is beautiful, just a little darker than caramel.  However, if you want to make it yourself, don’t do what I did instead try this method from Epicurious where you cook it slowly in the oven, a lot less mess.

The flavor works great when combined with a dark chocolate brownie. I didn’t use my traditional brownie recipe but found the recipe on Brown Eyed Baker. It has less sugar due to the sweetness of the dulce de leche and more dark chocolate. You can swirl the dulce de leche into the brownies, but I like to have some in every bite, so I spread it between two layers of brownie batter.

What you’ll need for brownies

Step 1: Melt the chocolate in a large bowl with the butter in the microwave. Whisk in the sugars and eggs and vanilla. Next add the flour and cocoa powder, don’t overmix.

Step 2: Place half of the brownie mixture into a prepared pan and spread the dulce de leche on top. Next pour the rest of the batter on top and bake.

If you would rather have swirls of dulce de leche in your brownies, then dollop the dulce de leche between the two layers of batter and take a knife and swirl it throughout the pan.

When you combine dulce de leche with a rich chocolate brownie, you get an amazing dessert.  So if you’ve been living on some remote island and don’t know about dulce de leche, pick up a jar next time you are on the peanut butter aisle and enjoy these easy dulce de leche brownies.

What’s the difference between condensed milk and dulce de leche?


They are both made of milk and sugar, the difference is that dulce de leche has been slowly cooked so that it caramelizes.

Is dulce de leche the same as caramel?


No, while they both have a beautiful brown color, caramel has butter along with cream and sugar and dulce de leche is just milk and sugar.

Do you need to refrigerate dulce de leche after opening?


Yes, it needs to be refrigerated because of the dairy in it. It will save in thee refrigerator for a couple of weeks or you can freeze it. 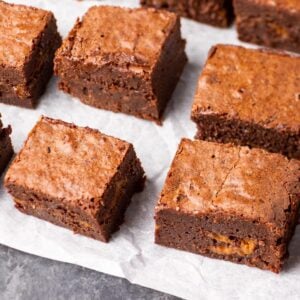 Author: Barbara Curry
Transport yourself to Latin America with these Dulce de Leche Brownies. The basic chocolate dessert stepped its game up with this caramel-like delight. The milky, sugary goodness of dulche de leche is to die for!
4 from 3 votes
Print Pin
PREP: 20 minutes
COOK: 30 minutes
Servings: 24